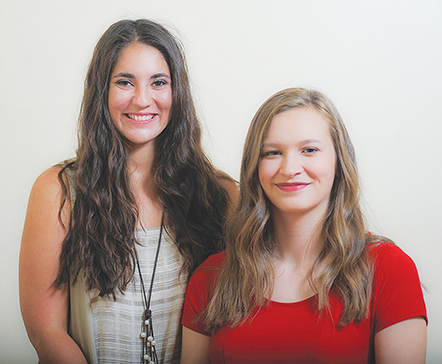 Grace Childers, left, and Mia Langendon were counselors at a summer camp.

When Grace Childers and Mia Langendoen agreed to volunteer as camp counselors, they didn’t realize what they could learn from Camp Lake Stephen’s seven- to 13-year olds.

Childers and Langendoen spent seven weeks at the camp training to be and serving as Counselors in Training (CITs).

The two were responsible for leading devotions from their cabins and helping campers grow in their spiritual faith. Most nights, the two lead their group in reading Bible verses, talking about their meaning, asking questions and finishing with prayer.

Leading devotion was new to Childers and Langendoen, but Camp Lake Stephens provided them with the tools needed to be successful leaders in their faith.

Childers and Langendoen were interviewed before being chosen for the CIT position, and were asked questions about their faith to ensure spiritual preparation for the summer. The camp also trained them in leading devotions and provided a folder of topic ideas.

“I’ve never had to be a leader in my faith,” Childers said. “But being a camp counselor you have to be. It caused me a lot of personal growth in general and helped me not be afraid to step up and take the lead.”

Specifically, the two were impressed with campers’ ability to ask questions about devotion topics.

“I was very amazed that campers thought about things I didn’t even think about sometimes,” Langendoen said. “When we would read a Bible passage they would see things I couldn’t and ask questions about it.”

Camp Rainbow is a 5-day session for special needs adults. During the session, there is a 1:1 camper to counselor ratio so Childers and Langendoen were both partnered with one camper each.

“It’s the most rewarding week, Childers said. “I never realized that special needs adults could take care of themselves, but they can, and they did a lot more for me than I did for them.

“They know how to live life and are so happy all the time,” she said. “If something doesn’t go their way, they just keep going with a smile on their face.”

Camp Lake Stephens, which is just three and a half miles past Lafayette Elementary School, also serves as a place for campers and counselors alike to grow mentally throughout the summer.

Childers and Langendoen were responsible for cafeteria duty — setting tables, cleaning dishes and putting them on campers’ trays — as well as doing chores like cleaning up the camp, assisting counselors, sleeping in cabins with campers, and belaying the high ropes course.

They were also CPR, AED and first aid certified and helped prepare the camp for summer by building bunk beds, painting signs and cleaning cabins.

“It’s hard work but it’s worth it when you see the campers arrive for the first time,” Childers said.

Even though it was the first year for Childers and Langendoen to serve as CITs, the two hope to return to Camp Lake Stephens next year as counselors.