The Perseid meteor shower promises to be an event of the year for stargazers.

But watching for many won’t be easy since cloudy skies will prevail overnight in many areas. Plus, NASA says that the really see the Perseids meteor shower you need to lie on the ground for 45 minutes to let your eyes adjust to the darkness.

So watching the Perseid meteor shower live tonight online may be a good idea. Here is where you can watch NASA’s live stream.

You can tune in at about 9 p.m. central time and begin seeing the meteor show but the best time for viewing will be between midnight and dawn August 11-12 (that’s tonight and into Friday morning).

From NASA: “The Perseids show up every year in August when Earth ventures through trails of debris left behind by an ancient comet. This year, Earth may be in for a closer encounter than usual with the comet trails that result in meteor shower, setting the stage for a spectacular display.

An outburst is a meteor shower with more meteors than usual. The last Perseid outburst occurred in 2009. 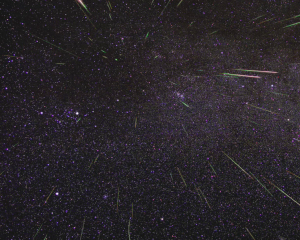