Sno Biz has been serving tasty treats since the ‘90s 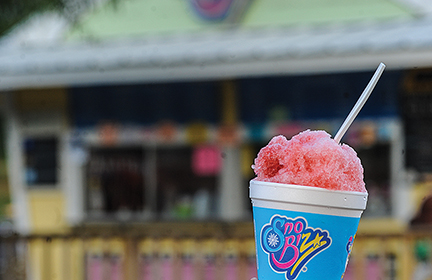 Life in the Mississippi Delta in the 1960s and ‘70s was a “fantastic” experience for John Sherman, 60, who fondly recalls having fun at the levee and at the lake that flowed into the Mississippi River.

He said Greenville was booming with farming and the tow boat business that pushed barges up and down the river for commerce and trade, sometimes loading heavy machinery and transporting it to St. Louis.

Life was good. His average morning involved leaving home at 7 a.m. on his bike and riding down to the levee to fish. His parents never worried where he was.

“They just knew that if a group of six boys was on their stingray bicycles with baseball gloves on the handlebars, bats taped to the crossbars and a baseball wedged in between there, that somewhere a baseball game was going to break out,” Sherman said Monday seated at a table outside Sno Biz at 1132 North Lamar Blvd.

“Every day, I was involved in some kind of sport — football, basketball, baseball, tennis, track. I was doing something with a ball every day.”

The same is true today. Sherman’s life is about basketballs and Sno Balls.

As a coach and educator for 36 years, he now leads the Lafayette High School varsity boy’s basketball team, and he has owned Sno Biz, a tiny store that provides cool treats during warm weather, for the past 20 years.

Sherman, who has also coached at Myrtle Attendance Center in Union County, Oxford High School, South Panola High School, Water Valley, and has worked as an assistant coach at Mississippi State University, said he became interested in purchasing Sno Biz  in the 1990s because he was looking for a business opportunity he could operate during summer months when he wasn’t coaching.

“I thought that for a man to sit around and do nothing for three months, is not very productive or not being a good father,” he said. “I was always looking for ways to make extra money.”

“I seized the opportunity,” he said.

The business remained on University Avenue for 19 years. Two years ago, it was relocated to North Lamar Plaza.

“Business has been really well received here,” Sherman said. “Over 19 years, I’d like to feel we have built up a nice little reputation as a family-oriented place.

“We have tried to provide a good product and good service over the last 20 years, so I felt like if we just didn’t get too far off the beaten path, that our customer base would find us, and they have. We feel like we’ve picked up another set of customers just from being on this side of town.”

“In April and May, the students are still somewhat here in full force,” he said. “It’s kind of the rite of spring.”

Closed from November through February and half of March, Sherman said customers are eager for the store to reopen.

“The springtime is fun, because it’s great weather and not too hot, and people can get out,” he said. “And the summertime brings on a different kind of customer. The students, at least half of them, are gone. It’s kind of a different set.”

Sherman makes his own ice, and he said the store goes through about 10 blocks of ice a day. He also uses coaching principles to train his staff.

“This has been a place where a lot of, mostly young girls, it’s their first job,” he said. “I have tried to instill in them a responsibility, a good work ethic. Just like everything else I’ve done in my life — running the business and raising my children — I kind of do it just like I’m coaching.

While many people call them snow cones, Sherman said that term is technically wrong.

“The product we serve is premium shaved ice,” he said. “It’s not crushed ice. It’s not a snow cone. Even though that’s what Mississippians prefer to call it. The ice is fine and soft, and that’s what brings customers back.”

Sherman said he trains his staff to serve a quality product with a smile.

“We have a sign above the window on the inside that says, ‘In a world where you can be anything, be kind,’” he said. “I tell them when I hire them, I’m going to train you to do this job so that when you move on and get another job, you’re going to be a great employee for whomever hires you the next time.”

Sherman graduated from MSU. Originally a business major, he later switched to education.

“My father was a grocery store owner,” he said. “He started in 1947, and I worked in the grocery store. I learned the business from him. I run Sno Biz like my father ran his grocery store.”

“I don’t know that I have a favorite, but I tell people that I really like cantaloupe,” he said. “When I first say ‘cantaloupe,’ they have a really surprised look on their face, but when they taste it, they understand why. It’s very smooth and light. It’s not overpowering.”

Sherman is also a fan of the cappuccino shaved ice, and he likes to combine watermelon and pina colada flavors.

“I guess we don’t advertise that great, but we have milkshakes and we sell Blue Bell Ice Cream,” he said. “We’ve got delicious, and I mean delicious milkshakes.

“We have probably over 60 flavors of milkshakes just because you can get a green apple/pink lemonade milkshake if you want to. You can get a blueberry milkshake. You can get a cantaloupe milkshake. Any flavor that we have of a Sno Ball, you can mix that with Blue Bell vanilla ice cream, and you’ve got a delicious shake.”

“I invite all the people who have been here, or who haven’t been here, who don’t really know what all we’ve got, to come and check us out,” he said.