What is a burkini? Muslim swimsuit is full body cover banned in Cannes

The Burkini has been banned in Cannes by because of terrorist attacks in France.

“Beachwear manifesting religious affiliation in an ostentatious way, while France and its religious sites are currently the target of terrorist attacks, could create the risk of disturbances to public order,” the city’s ruling banning burkinis says.

But, what is a burkini?

It is a full-body swimsuit (see picture below) worn by some Muslim women on beaches. They have been popular at the French seaside cit of Cannes. Because of the terrorist attack on Nice the city of Cannes decided to ban burkinis.

Several years ago burkini wear soared among non-Muslims in Britain after celebrity Nigella Lawson was seen wearing one to a beach in Sydney, Australia. 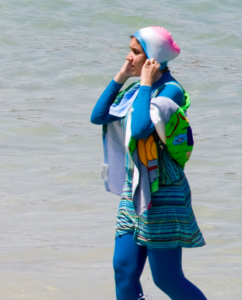