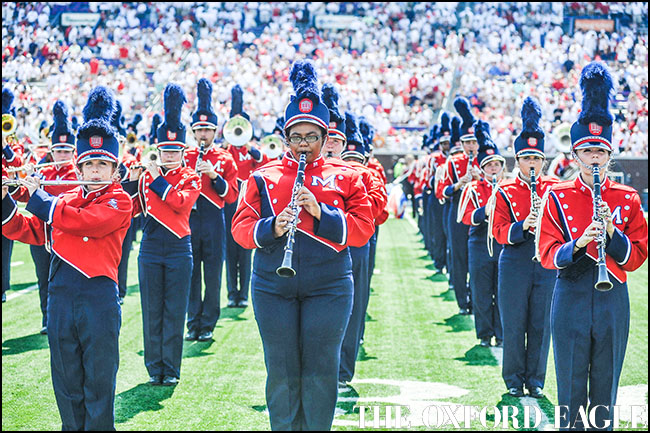 “Dixie,” one of the last vestiges of the Confederacy tied to the University of Mississippi, is dead.

The Ole Miss athletics department made the call to scrap “Dixie” and several variations of the tune from the marching band’s game-day repertoire.

“The newly expanded and renovated Vaught-Hemingway Stadium will further highlight our best traditions and create new ones that give the Ole Miss Rebels the best home field advantage in college football,” Ole Miss athletic director Ross Bjork said in a statement. “Because the Pride of the South is such a large part of our overall experience and tradition, the Athletics Department asked them to create a new and modern pregame show that does not include Dixie and is more inclusive for all fans.”

Bjork told the EAGLE a dialogue began in 2015 with campus leadership regarding “Dixie,” resulting in a slight adjustment last season by not playing it during the game.

Timing prevented “Dixie” from being totally scrapped in 2015 – a matter of logistics in terms of the band preparing for the season, Bjork said.

“But we also felt that during the game, it was the right decision not to play it.”

Back in 2009, then-Chancellor Dan Jones asked the band to stop playing “From Dixie With Love” — an emotionally charged, hymn-like medley of “Dixie” and “Battle Hymn of the Republic” — because a portion of the student section at Vaught-Hemingway Stadium refused to stop chanting “the South will rise again” during the band’s pregame performances.

The Pride of the South marching band has continued to play variations of “Dixie,” as decisions regarding the ensemble’s game-day programming is largely left up to athletics and not the band directors themselves, including the decision to scrap “Dixie” altogether.

Ole Miss has spent several years distancing itself from racially divisive symbolism. Former mascot Colonel Rebel was removed from the sidelines in 2003 and later removed from all university merchandise in 2010. Rebel Black Bear became the university’s official mascot after an online vote among students, faculty, alumni and season-ticket holders.

Chancellor Jeffrey Vitter is continuing the work of former chancellors Jones and Robert Khayat in approaching contentious symbols and monuments still tied to the university, including the development of the Chancellor’s Advisory Committee on History and Contextualization.

“The initial goal will be to recommend which Oxford campus sites should be contextualized, so as to explain the environment in which they were created or named,” Vitter said when the committee was announced. “The committee will then be charged with designing content and format to contextualize the designated sites.”

“Dixie” was written in New York in 1859 by composer Daniel Decatur Emmett, a work he developed for an upcoming minstrel show. It achieved widespread popularity in the North before the Civil War, but didn’t reach the South until late 1860.

“By sheer chance of fate, its arrival coincided with the outbreak of secession,” according to the New York Times. “As newly minted Confederates rejected the anthems of their old nation, they desperately sought replacements. Indeed, once it reached the South, ‘Dixie,’ despite being a song written by a Northerner, rose to prominence with exceptional speed.”

It played at Jefferson Davis’ inauguration in 1861, considered by some as an unofficial presidential endorsement, and was labeled the “National Anthem of Secession” by the Richmond Dispatch soon after.

Author and political strategist Stuart Stevens described the tune’s ties to Ole Miss in his 2015 book, “The Last Season”:

Like every Ole Miss fan, I’d grown up with the Ole Miss band playing “Dixie,” an assumed ritual like the singing of the national anthem. It was the Ole Miss football anthem. It was our anthem. Today it is popular for sports fans to call themselves “nation”: “Red Sox Nation” or “Who Dat Nation” for the New Orleans Saints. But when “Dixie” played at Ole Miss games, it represented the lost glory of an actual nation. No one ever died for the right to form Red Sox Nation. Tens of thousands died for the brief existence of the Dixie nation.