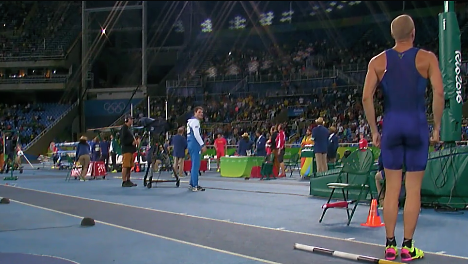 U.S. Olympic pole vaulter Sam Kendricks became a social media star when NBC's social media accounts shared a video of him preparing to jump during last week's event and stopping mid-stride to stand at attention during the National Anthem.

Sam Kendricks had a solid week at the Olympics in Rio with the world watching as the U.S. pole vaulter earned a bronze medal he’ll soon bring home to Oxford.

He gained even more widespread attention this weekend when a video surfaced of Kendricks preparing to jump during last week’s competition, stopping mid-stride and dropping the pole when hearing the National Anthem and immediately standing at attention.

Watch the video, which the NBC Olympics Twitter and Facebook accounts re-circulated Sunday, yielding thousands upon thousands of shares.

Kendricks, a second lieutenant in the U.S. Army Reserve, was the first representative of the nation’s armed forces to medal at the Olympic Games in Rio. The Oxford High School alum and former Ole Miss track star won a bronze medal for his high jump of 19 feet 2¼ inches, making him the first American to medal in the pole vault event in 12 years.