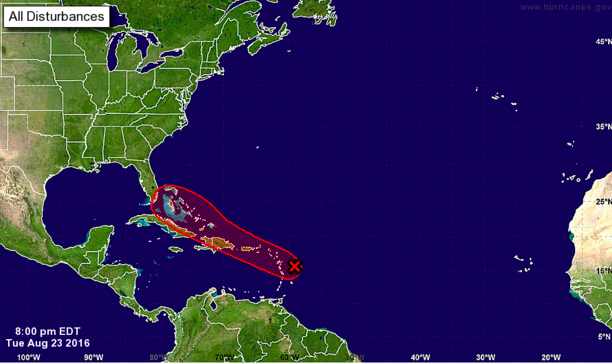 Will a hurricane strike the United States on Labor Day weekend? Here is the latest forecast path.

The U.S. has been spared the brunt of hurricanes for the most part in recent years. But all good things come to an end.

That’s why hurricane forecast watchers are paying close attention to a tropical disturbance forming in the Atlantic – Invest 99-L which could develop into a tropical depression or tropical storm before becoming a hurricane to strike the United States around Labor Day 2016.

According to the Weather Channel Florida has the highest odds of a strike, at a 51 percent chance.

“We continue to monitor Invest 99-L for the possibility of development into a tropical depression or storm as it moves into the Lesser Antilles, then heads in the general direction of the Bahamas late in the week. It’s possible this system could affect Florida and other parts of the Southeast U.S. late in the weekend into next week, however uncertainty remains high,” The Weather Channel reported tonight.

In other words, nobody know for certain because this storm is just now developing but models show that the United States could be in store for a direct hurricane strike sometime around Labor Day weekend.

States that could get a direct strike include Louisiana, Mississippi, and South Carolina and North Carolina, or more likely, Florida, which has the greatest odds.

The system is moving northwest at around 15 to 20 mph, NOAA reported this evening.

Islands in the northeastern Caribbean to the Bahamas have been advised to continue monitoring the progress of the system. Heavy rain, gusty winds, mud slides and flash floods could occur, according to the National Hurricane Center.