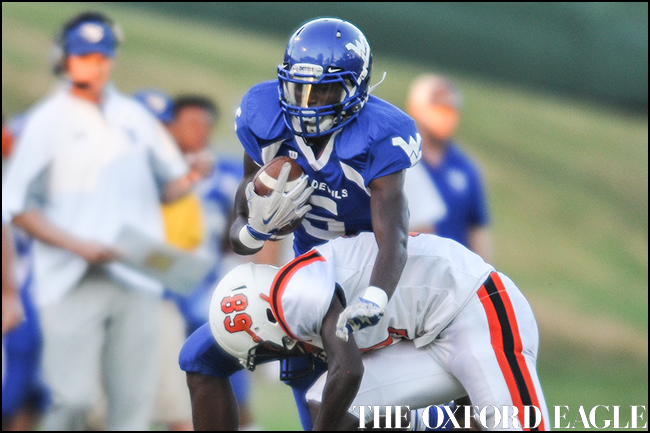 WATER VALLEY — The Blue Devils of Water Valley came off a huge win against rival Coffeeville last week and were hoping to use that momentum against a tough opponent in the Calhoun City Wildcats.

The Blue Devils were 1-1 going into the game and Calhoun City was also 1-1 going into Friday night’s game, but Water Valley fell 29-0 in its home opener at Bobby Clark Field.

Water Valley got into opposing territory on its first drive, but poor communication between quarterback Ty Varner and his receivers led to an unsuccessful drive. The Blue Devil defense would hold the Calhoun City offense scoreless until a 5-yard run by Wildcat running back Jessie Nabors gave the Wildcats a 6-0 lead with 11 minutes left in the first half.

Water Valley coach Brad Embry was overall disappointed but believes his team will get back on track through limiting mistakes and working hard in practice.

“Mental mistakes, turnovers, a few penalties that hurt early and stopped our momentum,” Embry said. “We get the ball down the field on the first drive and can’t capitalize, and it sets the tone for the rest of the game.”

After a big goal-line stand to keep the game within one score, a interception by Wildcat cornerback Keshun Robinson led to another Calhoun City touchdown. A successful two-point conversion would give the Wildcats a 14-0 lead with a little more than two minutes left in the half. Water Valley would put together an unorthodox drive to get some type of momentum before half.

A fumble by Taghee James was recovered by receiver Jalin Morgan for a 30-yard gain, putting the Blue Devils in opposing territory for only the second time. The drive would end with the Blue Devils simply running out of time.

The second half did not start out as Water Valley would have hoped, and a quick three plays would lead to a punt and Calhoun City possession deep in its own territory. The next play, Wildcat sophomore running back Anfernee Campbell broke free for a 56-yard gain before being dragged down by Trenderrious Brock.

Unfortunately for Water Valley, Parker would power his way to another Wildcat touchdown. With the game at 22-0, Embry would look to utilize Brock, looking to the sophomore on more than half of the plays in the last quarter and a half.

“He’s a great young player for us,” Embry said. “We have some guys that are coming along, and we just have to keep working.”

Brock would be a source of energy for the Blue Devil offense, leading Water Valley down field along with James. A turnover on downs would end the drive, and Calhoun City would march down the field quickly to score one last time, this a 27-yard run by Nabors, his second score of the game.

Water Valley received the ball with a little more than three minutes left in the game but fumbled on the first play, giving the ball back to Calhoun City and cementing a 29-0 win for the Wildcats.

Embry did not hesitate to remind his team of the importance of practice immediately following the loss. When asked what aspect needs the most focus in practice, Embry lightheartedly responded.

“A lot of everything,” Embry said. “Where we’re at right now, we have to see our mistakes on film and fix them. That’s the only way I know how to put it. We need to find what we can do and what we can’t do and just get better at it.”

Water Valley, now 1-2 on the season, will look to rebound next Friday when the Blue Devils travel to face Pontotoc, which is 3-0.