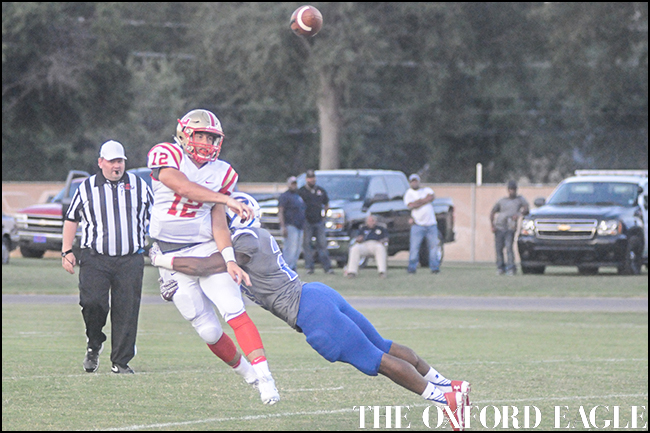 Lafayette quarterback Will Ard (12) is hit by Grenada's JJ Russell while throwing a pass Friday at Charger Field in Grenada. The Commodores lost 14-7. (Davis Potter)

Jamarcus Quarles was stopped short of Grenada’s goal line on fourth-and-goal with time running out, ending Lafayette’s upset bid in a 14-7 loss at Charger Field. It was a dramatic finish to an otherwise defensive struggle that saw all of the game’s points scored in the last 8 minutes, 13 seconds.

While Lafayette (0-2) hoped for a different ending, first-year coach Michael Fair said his team taught him something with the way it played as a heavy underdog against Mississippi’s ninth-ranked team regardless of classification.

“I found out we’ve got a really tough football team,” Fair said. “I found out we’re close to where we want to be. We’re not there yet, but if we’re looking at (the first game’s) film against this week’s film, we’re getting there.

“Just like I told our guys (after the game), what doesn’t kill you makes you stronger, and games like this is what makes great football teams if they react the way I know they will. We’re going to be in the mix.”

Lafayette, back in action for the first time since opening the season against Horn Lake on Aug. 19, held Grenada’s run-heavy offense in check, but the Commodores had just as much trouble trying to move the ball for a majority of the night as the teams combined for 514 yards of offense and 16 punts. The Commodores also had field goals go wide in the second and third quarters.

But Grenada (3-0) took advantage of a Lafayette miscue to break through midway through the fourth quarter when JJ Russell pounced on Tay Tay Owen’s muffed punt at Lafayette’s 35-yard line. The Chargers used seven plays and the help of a pass interference penalty to get on the board first on Isiaha Tripplet’s 5-yard touchdown run.

“We were right there, and it was kind of one of those things of who’s going to make the biggest mistake first,” Fair said. “We muffed a punt, they capitalized, and here we go.”

Lafayette needed just three plays to answer, capping an 81-yard drive with Will Ard’s 18-yard touchdown pass to Tyler Carmichael-Williams to draw the Commodores even. The back and forth continued when Deon House ripped off a 40-yard scoring run two plays later to put Grenada back in front with 6:22 remaining.

The Commodores continued to lean on Quarles, who ran for 112 yards in the second half and carried on six of Lafayette’s next eight plays to help the Commodores reach the Chargers’ 1 with less than 3 minutes left. After Ard was stuffed on a sneak on third down, Lafayette wanted to get its junior running back to the edge against Grenada’s crashing defense, but there wasn’t anywhere to go.

Said Fair, “It’s hard to argue with a guy that ran like he did in the second half. I knew I wanted the ball in his hand, and we just didn’t capitalize.”

“It’s very disappointing when you think you have it and then they just snatch it back away from you, but everything happens for a reason,” Quarles said.

Up next for Lafayette is a short trip across town to take on Oxford in the annual Crosstown Classic next Friday.