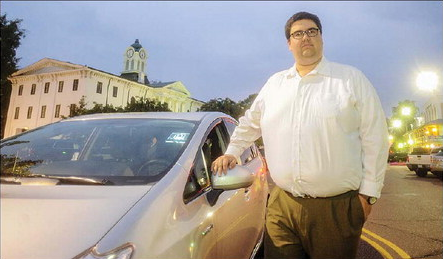 Matt Nichols is an Uber driver in Oxford and believes the service can coexist with the established taxis in town. (Bruce Newman)

Labeling the Uber ridebooking service as something new to Oxford isn’t entirely true.

The company, which utilizes an app on smartphones that patrons use to call drivers, was first introduced in 2014, but was soon outlawed thereafter.

Nearly two years later, Governor Phil Bryant signed House Bill 1381, which allowed the vehicle-for- hire company to begin again on July 1. In the two months that have passed (and a new school year starting), students have been utilizing the service, but some taxi drivers say they don’t notice much of a difference from before.

Sue La Crosse, who has been the owner of Angel Taxi in Oxford for 13 years, hasn’t noticed much of a change since Uber arrived.

“I’m not sure if the students are using it or not,” La Crosse said, “but we’re busy.”

La Crosse still has some hesitations about the service though, especially since many established companies have been operating in Oxford for so long.

“With respect to Uber, some of them don’t know where they’re going; some of them do,” La Crosse said. “Sometimes they can get to my customers faster than me.”

Matthew Nichols, an Oxford Uber driver who has been with them since their re-inception in July, finds that the company has some technological advantages over traditional services, which has driven millennial students to use it more.

“From personal experience and what passengers tell me, it’s because Uber has openly embraced technology more than the taxi companies, and is cheaper to use and more convenient,” Nichols said.

He added that many students take Uber as an easy means to avoid drinking and driving.

“Every night I drive I have students tell me that they took Uber instead of trying to chance it driving home,” Nichols said. “I also think the fact that Uber documents the rides gives them a sense of security that they won’t get taken advantage of.”

And it’s not just the Ole Miss student body who has been embracing the service.

“The vast majority of my passengers are students, but I have also given rides to alumni, locals and people visiting Oxford on business, people from all age ranges,” Nichols said.

Even if the taxi companies in town have to compete with Uber for passengers, the service occasionally has internal fighting for customers on particularly busy weekends. Nichols notes how last weekend drivers were paid extra to come down from Memphis and work in Oxford.

“The market was oversaturated with drivers and I made significantly less than I normally do during a weekend,” Nichols said. “It was great for customers, but it ends up hurting the local Uber drivers.”

Nichols believes that ultimately Uber and taxi services can co-exist in Oxford if they focus on different opportunities.

“A lot of students like to go out in large groups and a single Uber can only accommodate four passengers at a time, while most of the local taxis are large vans,” Nichols said. “If the taxis focused on the niche market of large groups and hauling students home at closing time, I think we could both prosper.”