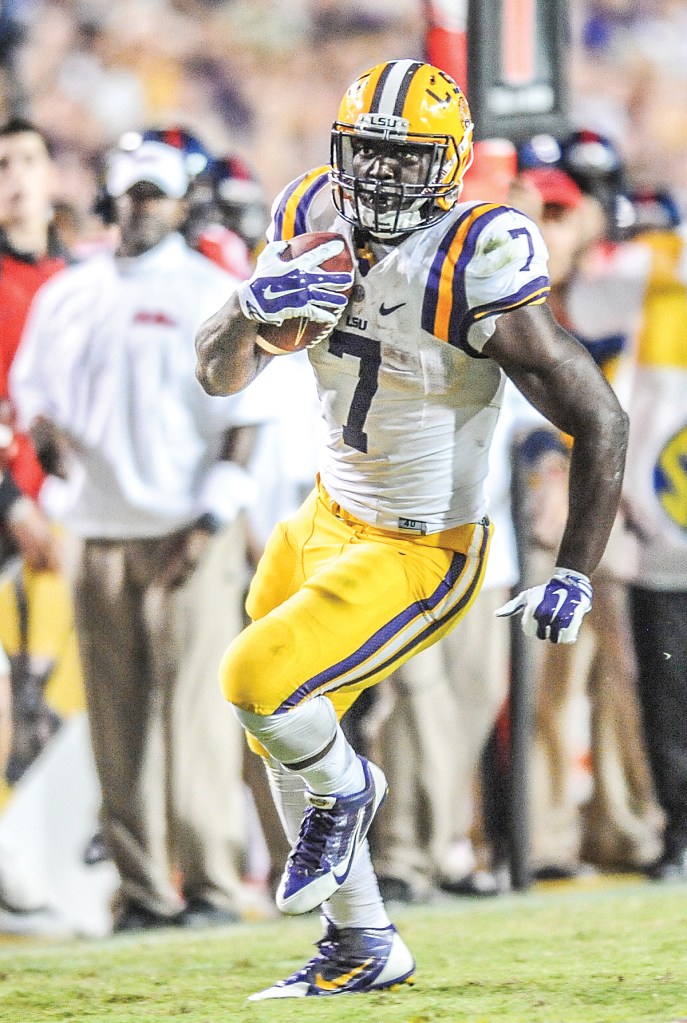 After sitting out last week’s game against Jacksonville State to allow an ankle injury to fully heal, LSU’s Leonard Fournette (7) will return to the Tigers’ lineup against Mississippi State on Saturday night. (Bruce Newman)

The first Southeastern Conference night game inside famed Tiger Stadium takes place on Saturday in Baton Rouge, Louisiana. No. 20 LSU hosts Mississippi State at  6 p.m. (ESPN2) and will have a lot of eyes on them as well as the Bulldogs.

After a top-5 preseason ranking, the Tigers (1-1) find themselves looking up after a free-fall in the polls due to the opening week loss to Wisconsin in Green Bay. LSU rebounded with a win over Jacksonville State last week, but the true test of how this team can respond comes Saturday night against a Bulldog team that rebounded itself a week ago.

Mississippi State (1-1, 1-0 SEC) defeated South Carolina 27-14 at Davis Wade Stadium, eliminating the sour taste in its mouth after a 21-20 loss to South Alabama to kick off the season on Sept. 3.

“I’m really happy how our team responded (against South Carolina),” Mississippi State coach Dan Mullen said. “I thought the effort was better as a group. I think they’re ready for their first challenge. It’s a big challenge. A lot of young players and the first time they’re going to have to go play on a road environment in the SEC.”

After sitting the majority of the game against South Alabama and watching freshman Damian Williams handle most of the snaps, quarterback Nick Fitzgerald got the start against South Carolina and his performance earned himself the starting job for now. Fitzgerald went 19 of 29 for 178 yards and two touchdowns in the Bulldogs’ win but did throw one interception.

The quarterback position is a key topic for LSU as well with head coach Les Miles benching Brandon Harris during the Jacksonville State game and allowing transfer Danny Etling to take over. Etling went 6 of 14 for 100 yards with one touchdown and one interception.

During this week’s SEC coaches teleconference, Miles hinted that it would be Etling getting the start over Harris but was mum on the topic beyond that.

“We’re going to keep that in-house,” Miles said when asked who would start. “I can’t imagine that Danny Etling would not take the first snaps, but we’re going to let the week play out. … What will go into that decision will be the game week and how (Etling) performed (against Jacksonville State).”

Nicholls gave Georgia fans quite the scare between the hedges last week as the Colonels tried to upset the No. 16 Bulldogs, falling 26-24.

Georgia did not look like a team picked to rival Tennessee for the SEC East crown as the Bulldogs struggled to put away a pesky Nicholls team.

They will get a chance to bounce back this week, but the level of competition will be higher as Georgia (2-0) opens up conference play on the road at Missouri on Saturday (6:30 p.m., SEC Network). The Tigers (1-1) are coming off a 61-21 rout over Eastern Michigan after falling to West Virginia in the opening week.

For the Bulldogs, they will look for better play out of true freshman quarterback Jacob Eason. Eason was 11-for-20 for 204 yards and tossed one touchdown and one interception against Nicholls.

“I think (Eason’s) in a good place mentally,” Georgia coach Kirby Smart said. “Jacob had a couple misreads (against Nicholls). He didn’t look at the right thing first. He had some really good plays, too. … He handled things much better than he did the first game.”

It has not been a great start to Kentucky’s season. Blowing a big lead and falling to Southern Mississippi the opening week followed by a 45-7 loss against Florida last week has the Wildcats in a hole early. They get a chance for their first win of the season on Saturday as New Mexico State (1-1) comes to town (3 p.m., SEC Network).

“Looking forward to getting home and playing New Mexico State,” Kentucky coach Mark Stoops said. “We’re not very pleased with how we’ve started the season and looking to another opportunity this week. We had to really go back and work on ourselves.”