What happens in the Ole Miss Grove during the game? 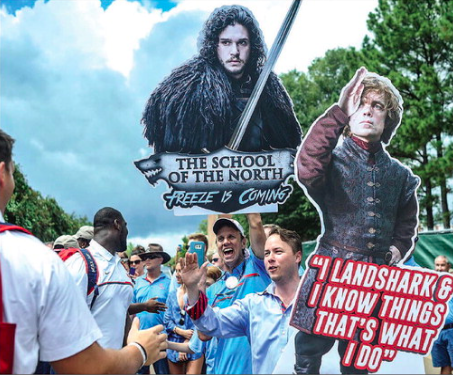 Who exactly was that handling your food and drinking your drink in the Ole Miss Grove during the game while you were away?

Yes, what happens in the Grove at halftime should probably stay in the Grove. But there is a pilfering culture among some mostly young types who enjoy the free food and alcohol while you are away at the game that gets a bit old.

They like to touch your food for choosing, eating choice selections, and down your alcoholic beverages while you try to cheer the Rebels back to prominence. And, they don’t seem to mind that when you get back to the tent and take a bite of those chicken strips your friend brought, that you don’t really know whose dirty hands, or how many, have handled it in your absence.

Take Saturday’s Alabama game as an example. Middle-aged Scott graduated from Ole Miss in the late 1980s and doesn’t get back to many games, so he was surprised by the scenes he found sitting back at the tent while the game was underway.

There is a sub-culture of vagrants, he noted, who wait for the masses to leave to let the free wine and dine began. He watched two young, slightly-intoxicated gentlemen who didn’t appear to be Ole Miss students stroll up to a tent, make themselves plates of food with a little touchy-feely game of do-I-want-this-or-not before taking a seat like they belonged to have some bites.

Scott sensed what was happening and gave a this-is-not-good glare. The young gents quickly discarded the plates, dished out an awkward “sorry,” and hustled on along to a better option.

Another middle-aged Rebel from North Jackson arrived at the Alabama game on Saturday with a new lock on his ice chest, so he was able to better-manage the pilfering game-time Grove culture. The previous week, for the less-attended Wofford game, he had brought 28 beers in his ice chest, only to find that when he got back to the Grove late in the game the ice chest was empty.

He wondered: if he lost two dozen beers during the Wofford game from an unmanned ice chest how might he lose for the Alabama game?

Some high school students from the region have known the dirty little secret for years now. Nobody checks ID’s at empty tents stocked with quality alcohol, after all. Thus, they slink around amid the nearby roars from the stadium looking to land some easy scores and do until the masses trickle on back.

That’s why some big groups always have a member left behind during games.

There isn’t much anyone can do about this game-time Grove dilemma, beyond leaving someone behind. If authorities patrol the Grove, looking for poachers, they can’t tell one young person from another, or know who belongs with whose tent anyway.

So the only moral to the story is that maybe one does need a lock on an ice chest, or someone to keep a close, protective watch on the chicken tenders when the Rebels are on the field.

Otherwise, your game day Grove spread may not be the same upon your return.

David Magee is Publisher of The Oxford EAGLE. He can be reached at david.magee@oxfordeagle.com.