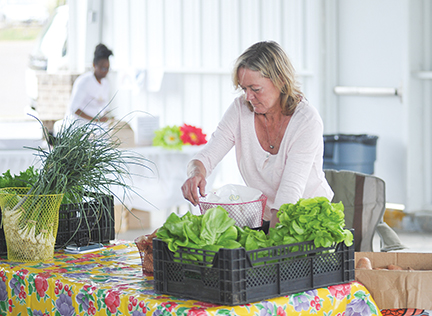 Terri Massey works her booth on opening day of the Oxford City Market, in Oxford, Miss. on Tuesday, April 19, 2016. The market is located in the Pavilion.

In 2013, the aldermen started the Oxford City Market to promote local farmers, encourage sustainable living and bring produce to more of its residents.

However, the goal was for the market to eventually become self-sufficient, and leave out from under the umbrella of the city government.

Three years later, the Oxford City Market has done just that and on Oct. 1, the market will merge with the Oxford Community Market, a nonprofit organization with a volunteer board of directors.

The city’s fiscal year runs from Oct. 1 to Sept. 30, which is when the funding for the market will end.

John Winkle, chairman of the Oxford Community Market board, asked the aldermen Tuesday for a $14,000 donation to allow the market to continue being able to participate in its outreach programs during the transition period.

“I am here asking for the one-time donation to continue and expand, without interruption, the outreach work started four years ago,” Winkle said.

The market now accepts SNAP benefits — formerly known as food stamps and offers a dollar for dollar match program, sponsored by AARP, up to $10. Earlier this year, the started a mobile market program where a mini-market was held at C.B. Webb apartments once a week for a month.

“Many in our community still need better access to fresh produce,” Winkle said. “The market doesn’t have the resources right now to cover the expenses associated with these outreach programs.”

Winkle said the market will apply for grants to run the market but those can take several months to receive.

Alderman Janice Antonow made the motion to approve the one-time donation of $14,000, which was approved unanimously.

“What you’re doing is amazing,” she told Winkle. “These are the types of programs we had in mind when we started the market and now they’re falling into place, and it’s wonderful.”

The Tuesday market will continue once it’s under Community Market management, giving farmers two days a week to sell their produce and homemade products.

The Community Market will assume the acronym OXCM, which is currently used by the Oxford City Market, to help make a smooth transition for the community.