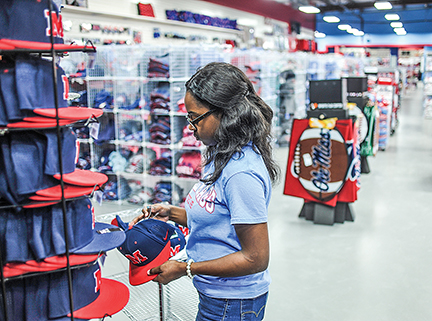 Terry Warren, who has been a business owner in Oxford for over 25 years, says that business is booming whether the Rebs are on the field or off.

It’s no surprise that during football season, jerseys are a top-selling item.

But during the offseason, the items sold tend to vary.

“Ladies come in and buy workout gear,” Warren said, “And a lot of tents and coolers. Baseball caps are huge when the baseball team does well. Every week it’ll be something different depending on what’s going on.”

The recent renovations, which were unveiled last Thursday, reflect the high sales figures of the store.

Warren says the store has been transformed from its humble 2,800 square feet beginnings to a newly estimated 26,000 square-foot shrine to Ole Miss.

“We tapped a market where fans were looking for a product and under one roof,” Warren said.