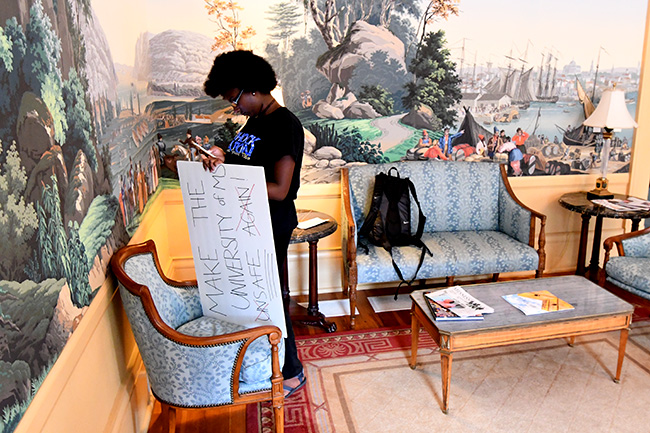 Protest at the Lyceum at the University of Mississippi, in Oxford, Miss. on Friday, September 23, 2016.

University of Mississippi students occupied the Lyceum Friday afternoon in response to a statement released by Chancellor Jeffrey Vitter they felt “failed to explicitly acknowledge and condemn” a racist and threatening Facebook comment written by student Jordan Samson.

Carrying signs, laptops and cell phones to document the sit-in, students filled the first and second floors of the administration building while waiting for a response from Vitter.

Leaders from the campus chapter of the NAACP are moving forward with a series of requests for Vice Chancellor Brandi Hephner LeBanc, according to The Daily Mississippian.

Here is the start of what Dom Scott, Allen Coon & Makala McNeil (UM NAACP) are drafting to give to Vice Chancellor LaBanc pic.twitter.com/qvgXJWl3on