UM alums create ‘The Lion and The Lyceum’ children’s book 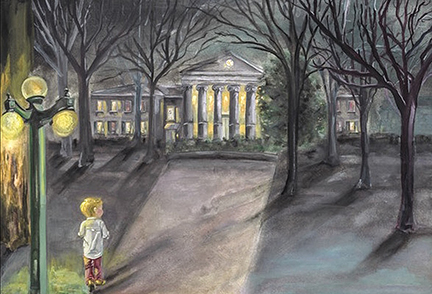 An illustration from the children’s book, “The Lion and The Lyceum”

In “The Lion and The Lyceum,” a new children’s book by Ole Miss alumni Alex Beene and Taylor Wiedemann, familiar university locales become the basis for a child learning the alphabet. The book, which was originally conceived by Weidemann, has been a long time in the works.

The duo, who both currently live in Tennessee, initially teamed up in the fall of 2014 to work on the book after Beene met Wiedemann through a mutual friend.

“I had a friend who told me his sister-in-law was an illustrator,” Beene said. “(Wiedemann) told me how she had an idea for a children’s book about Ole Miss and we got the ball rolling from there.”

Beene says that working with Wiedemann was a perfect pairing for this project.

“She has an unbelievable gift for capturing what we’re looking at,” he said. “We both have a passion for Ole Miss and Oxford. She’s great with me outlining words and her putting an image in place to replicate that. Everything in the book looks pristine.”

The concept for the book came to Wiedemann after she attended a friend’s baby shower.

“I noticed there were so many Ole Miss themed gifts like smocked Jon Jons and embroidered onesies,” Wiedemann said in an email interview, “but there wasn’t anything Ole Miss related when it came to children’s books.”

Wiedemann’s own two children served as an inspiration as well.

“I thought about what a special thing it is to read them a bedtime story,” she said. “It’s this magical time where their imaginations can run wild as they unwind from their day. (The book) is about learning the ABC’s, but it also whisks you and your little one away back to that beautiful campus that captured your heart.”

Beene and Wiedemann will be selling and signing copies of The Lion and The Lyceum on Saturday, in the Grove before the Georgia game.