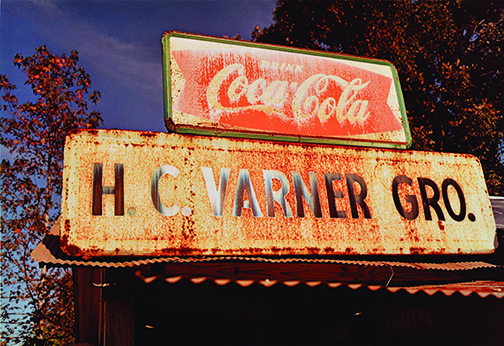 A chandelier. A boarded up building. A gas station. All mundane objects and places that become sublime when viewed through the lens of photographer William Eggleston.

Works by the Memphis-born and Sumner, Mississippi-raised Eggleston will be on display at the University Museum at The University of Mississippi until January 14, 2017 in an exhibition titled, “The Beautiful Mysterious: The Extraordinary Gaze of William Eggleston”.

“His photographs feel like moments captured from a much larger narrative- one that remains just beyond our reach,” writes guest curator and novelist Megan Abbott in the introduction title wall to the exhibit, which opened Sept. 13.

Author and photographer Maude Schuyler Clay, who is also Eggleston’s cousin, served as a consulting advisor for the exhibition which features 36 framed images of the photographer’s work.

Robert Saarnio, the Director of the University Museum and Historic Houses, says the idea for the exhibition came from the fact that the Museum has several dozen Eggleston prints in its Permanent Collection (a gift from the scholar and author William R. Ferris), but they had never before been displayed to this extent. In addition, the exhibit was sponsored by the Friends of the Museum.

There will be an opening reception for “The Beautiful Mysterious” on Oct. 6 from 7 p.m. to 9 p.m. and the public is encouraged to attend. On Oct. 7, the Museum will be hosting a Symposium in which six scholars will discuss the work on display. The event will be held at the Overby Center for Southern Journalism and Politics at 10 a.m. to 2 p.m.

Artists dig into their personal journey