Who is Lester Holt? debate moderator

It’s the first presidential debate of 2016 tonight and Lester Holt is the moderator.

That may prompt some to ask: Who is Lester Holt?

Holt is the weekday anchor of NBC Nightly News. He attended but did not graduate from Cal State Sacramento.

Moderator Lester Holt of NBC News will be under enormous pressure to maintain control and act as an objective referee. In the lead-up to the debate, Trump maintained that it would be improper for Holt to try to fact-check the candidates’ statements in real time. Clinton spokesman Brian Fallon tweeted that if debate moderators don’t fact-check the candidates, “it is an unfair advantage to Trump, who is a congenital liar.”

Holt, interestingly, is a registered Republican, according to The Washington Post. And, he is the first black presidential debate moderator since 1992. 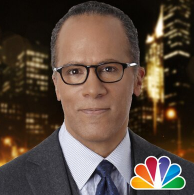 Lester Holt is the moderator of the first presidential debate.

Here is more on Holt.