Oxford School District apologizes to community, says it ‘will not tolerate segregation’ 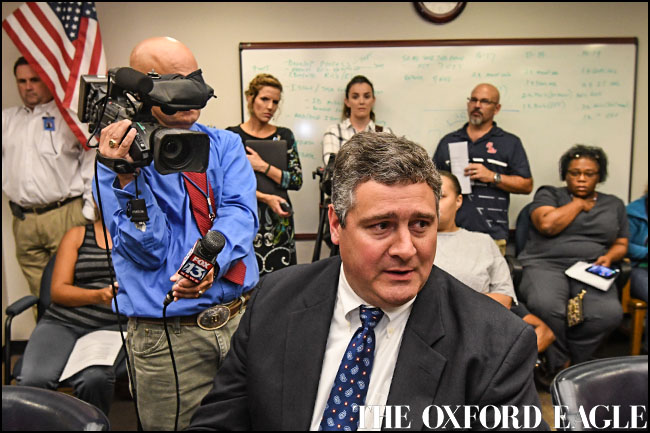 Superintendent Brian Harvey apologizes for what he said in an interview with the Oxford High School student newspaper, The Charger, during a special called meeting of the Board of Trustees of Oxford School District in Oxford, Miss. on Friday, September 30, 2016.

The Board of Trustees of the Oxford School District voted this afternoon to approve a joint statement from the board in response to the community’s anger after a story appeared in the high school’s newspaper, The Charger, Thursday where Superintendent Brian Harvey discussed ways to close the achievement gap in the district that included discussions of an opt-in school for students who receive free lunches.

The board called the special meeting for noon after protests were held Thursday night by parents of students in the district in front of Oxford Middle School and students in the middle and high schools held prayer vigils and sit-ins during the morning hours of school.

About 40 people packed the small conference room on the district’s Central Office. Prior to approving the statement, the board allowed public comment where several people spoke before the board. One woman said her son said he felt he no longer belonged at the school.

After about 45 minutes of making edits and going over the statement, the board unanimously approved it and printed out copies for those attending the meeting.

“First, we want to apologize to the community for any actions or statements made by the board or district administrators that have caused harm. Many of you are concerned about the recent article in the Oxford High School student newspaper, The Charger.

To state clearly, the district has no plans to create a separate school for free/reduced lunch or any other group of students. We will not tolerate segregation on the basis of socioeconomic status or race.

Our goal is to be sure that every student who walks through the doors of any of our schools has an equal opportunity to succeed. We want to provide the support and resources we can to ensure that goal is realized. We intend to close our achievement gap. We are evaluating a number of alternatives that have worked in other parts of the country.

Once we have reviewed these alternatives, along with associated research and data, we will discuss the most promising in open meetings with active engagement of the community. We recognize that Oxford is a unique and special place. Therefore, only after this process is fully complete, hand-in-hand with the Oxford community, would we take any formal action. To date, no plans have been made other than to start this process.

It is true that the district invited the group, the Urban Learning and Leadership Center (ULLC) to make a presentation to district officials and members of the community about their programs in Virginia, Louisiana, Texas and elsewhere. One of their success stories is a school in Virginia where some low socioeconomic students do have the option of attending a separate school intended to provide support not offered in the other schools. Reviewing programs that have been successful is part of this process. There is much to be learned, regardless of how our district proceeds. However, again, we have no plans to create a separate school and will move forward only with participation of the Oxford community.

We thank the students, parents, and other community members who have spoken out about this issue. We want to make certain that all parents, and especially students, feel welcome in our schools and free to speak their minds. We thank The Charger newspaper for highlighting these issues and we hope that the energy and passion of this week’s events and expressions of concern will harnessed for the good of our students and district as we continue our work.”