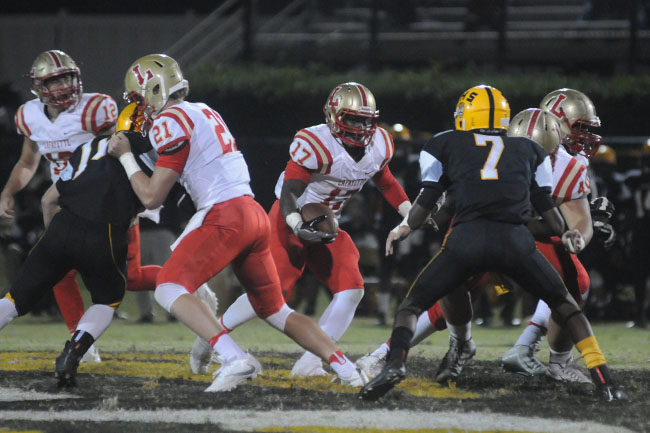 Lafayette's Jamarcus Quarles (17) runs the ball up the middle while Ripley's Austin Cox (7) attempts to tackle him at Ripley High School on Friday. The Commodores won 28-14. (Jake Thompson)

RIPLEY — When his team was huddled around him in the middle of the field after Friday’s game, Lafayette head coach Michael Fair called his team “scary good.” Those were his words after yet another game where he did not see four-quarters of complete effort.

It was still good enough, though, as the Commodores kept their wining streak alive with their fourth straight in a 28-14 win over the Ripley Tigers at Ripley High School.

The game was also both team’s Region2-4A opener.

After jumping out to fast starts in their previous two games against Louisville and Charleston, the same could not be said about Friday’s. Both teams were unable to get their offenses going each of their first two possessions with Ripley punting and turning the ball over on downs while Lafayette (4-2, 1-0 2-4A) fumbled the ball away on their second play of the game and then punted their next possession.

The Tigers (3-3, 0-1) were the first to find the end zone, capping a nine-play drive with a five-yard run by quarterback Owen Childs late in the first quarter for a 7-0 lead.

Lafayette struggled through the first half, getting only 52 yards of total offense against the Ripley defense. Quarterback Will Ard was 2 of 6 for 17 yards and running back Jamarcus Quarles had 10 carries for 35 yards and a fumble after 24 minutes of play.

The Commodores got a shot in the arm late in the second quarter when Brandon Turnage picked off pass from Childs, returning it 68 yards to tie the game 7-7 with 4:38 left in the half.

“(Ripley) stacked the box on us,” Fair said. “They changed their defensive front for the first time all year that we’ve seen. There was a transition process and we just said, ‘Hey, lets play great defense until we get our blocking schemes figured out for a 3-5 front.’ It was just things we had to figure out as we went.”

The most valuable player on Lafayette’s sideline in the first half was punter Drew Dabney. The Oxford transfer helped the Commodores flip the field by averaging 39.75 yards on four punts in the first two quarters. Dabney had punts of 34, 38, 42 and 45 yards.

“A great defense and a great punter will get you a long ways in this world,” Fair said. “We’re fortunate enough to have both. I’m glad that our defense played like they did, especially in that second half. I’m real confident in our special teams. That’s something that adds a dimension to who we are.”

Halftime adjustments paid off immediately for Lafayette, who marched 83 yards on their first possession out of the break and used an eight-yard run by Quarles to break the tie and take a 14-7 lead. Two possessions later the Commodores went 58 yards on eight plays with Jamie Shaw stretching Lafayette’s lead out to 21-7 with a two-yard run late in the third quarter.

Ripley got on the board a second time after a 13-yard pass by Childs found Jey Johnson to for the final margin after Quarles had a touchdown run of 79 yards the previous drive.

Ard finished the night 7 of 14 for 105 yards while Quarles rushed for 181 yards and two touchdowns on 23 carries. He fumbled once more late in the game for two turnovers on the night.

It is a short turnaround for Lafayette, who hosts Rosa Fort for Homecoming on Thursday.