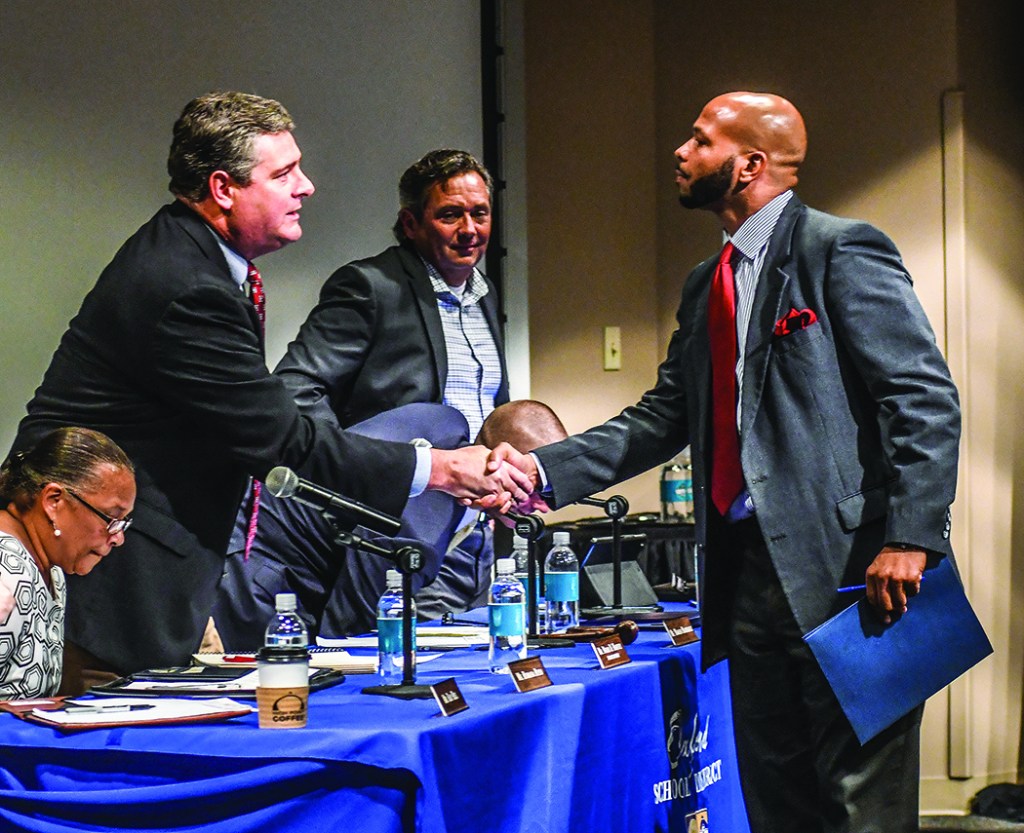 Oxford superintendent Brian Harvey, left, greets Walter Zinn before the start of an Oxford School Board meeting at the Oxford Conference Center in Oxford, Miss. on Tuesday, October 18, 2016.

The Oxford School District Board of Trustees held a hearing session last night for concerned parents who wished to voice their concerns after an article was published in the high school newspaper last month discussing the possibility of building a school for lower income students in an effort to close the achievement gap.

A room in the Oxford Conference Center was nearly filled with parents and other residents as well. The meeting was requested by Walter Zinn, an attorney from Pontotoc, who was hired by a group of parents perturbed by the subject matter in the article.

At the start of the meeting, ODS president Marian Barksdale made it clear that this was not a back-and-forth discussion, but rather the board was there to listen to residents.

After opening remarks from Zinn, who found the contents of The Charger article to be “alarming,” Jacqueline Certion, spoke to the board. Certion stated that, “an increase of racial diversity among faculty and extracurricular activity leaders” needs to happen, citing that it is currently at ten percent.

Questions to the board continued when Tori Marion White spoke about the achievement gap that the district is trying to close. She believes that the board should hire a dedicated person to focus on strategies to make it smaller.

Daniel Matthias, the parent of a 14-year-old Oxford student, spoke next and said that he was shocked to hear about the article.

“I don’t know how you come out of your heart and say something like that,” Matthias said. “We cannot continue to separate our kids from one another. Oxford is better than this.”

Zinn then requested that the board release data regarding the achievement gap and exactly how far they have to go. He also asked for the demographic breakdown of students who have been suspended or been arrested in school.

“(The data) would allow us to be informed participants,” Zinn said. “Has nothing been done up to this point? A lot of conversations have not been happening up until today.”

“I don’t think white and black was ever the issue,” he said. “Don’t believe everything that’s written. We need more parents involved.”

The final speaker of the evening was Celeste Green, an Oxford resident whose father was the first black man to sit on the Board of Education.

“What is happening is not fair,” she said. “These children don’t have a problem with each other. If you want to bridge the gap, bring in some black faculty.”

Before the meeting concluded Barksdale thanked those who came out for voicing their opinions.

“We will investigate and include the community in the work that we do,” she said.

The next Board of Trustees meeting will take place next Monday, Oct. 24 at 5 p.m., where there will be a 30-minute time slot for citizens to speak to the board.

Ingraham excited that Sinfully Southern is now a reality