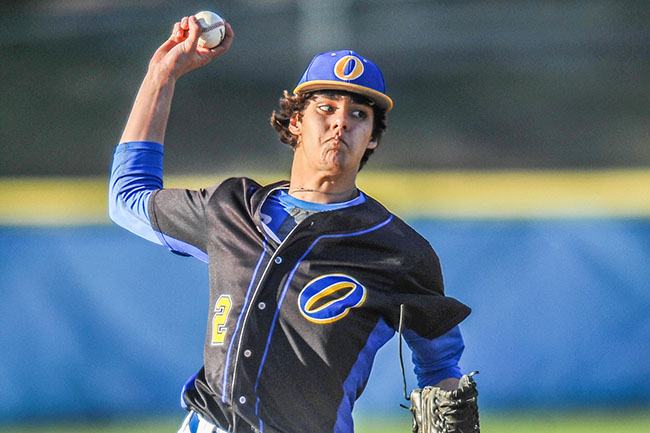 Oxford High vs. Cabot High at Edwin Moak Field in Oxford, Miss. on Saturday, March 19, 2016. High School pitchers will be required to throw a maximum of 120 pitches before being removed from the game in a proposal that was passed by the MHSAA on Oct. 6 (Bruce Newman)

The Mississippi High School Activities Association passed proposals for the sports of baseball and basketball during its Oct. 6 meeting. The biggest change coming out of the two is a mandated pitch count proposal for baseball.

The required pitch count rule for all teams will go into effect beginning with the 2017 baseball season. Along with the pitch count will be a corresponding amount of days a player will be required to rest. The maximum number of pitches a player can throw is 120, equaling a total of four days off. The number of pitches goes down incrementally with 105 pitches getting three days rest, 75 pitches (two days), 50 pitches (one day), and if a pitcher tosses 25 pitches or less, he will be eligible to return the following day if need be.

“Ever since we changed the playoff format and tried to go to having as many games in as few days as possible, the goal was for the best team to win,” Oxford coach Chris Baughman said. “It’s tough because I see it at both ends. It’s tough on your smaller schools that have a really good pitcher. It’s very tough on them. They want to run him out there whenever they can.”

The National Federation of High Schools (NFHS) passed a safety rule back in July, requiring all state associations to implement a pitch count for the sport of baseball for the 2016-17 school year. With the school year taking place in Mississippi only a month later, the MHSAA plans to monitor the new rule during the upcoming baseball season and will re-evaluate at the end of the season in May and make any necessary recommendations for adjustments in the future.

How the MHSAA plans to monitor if schools are abiding by the new rule, teams will be required to record the games with the opposing team, noting the names of each pitcher and how many pitches that pitcher threw in the contest. The information is required to be input on the MaxPreps website along with the result of the game within 24 hours of conclusion. There will be a form that both teams will complete and then share with the opposing after each game.

The penalty for a school that uses an ineligible pitcher, one who violated the pitch count, will result in that team forfeiting the game in which the pitcher played in as well as a fine of $250 toward the school.

“I do believe that A, it protects our kids a little bit more,” Baughman said. “B, it does cause coaches to really try and do a better job throughout the year at developing some pitching depth. That’s something that you see any 4, 5, 6A school do.”

The basketball proposal that was passed by the MHSAA is not a major one but will affect what takes place during the eight-minute halftime. Only teams that are participating in the game being played are allowed to warm up during that contest’s halftime. If it is a girls’ game being played, the boys’ teams will not be allowed to come out and warm up.

Warm-ups are going to be limited to designated times immediately prior to the next scheduled game.