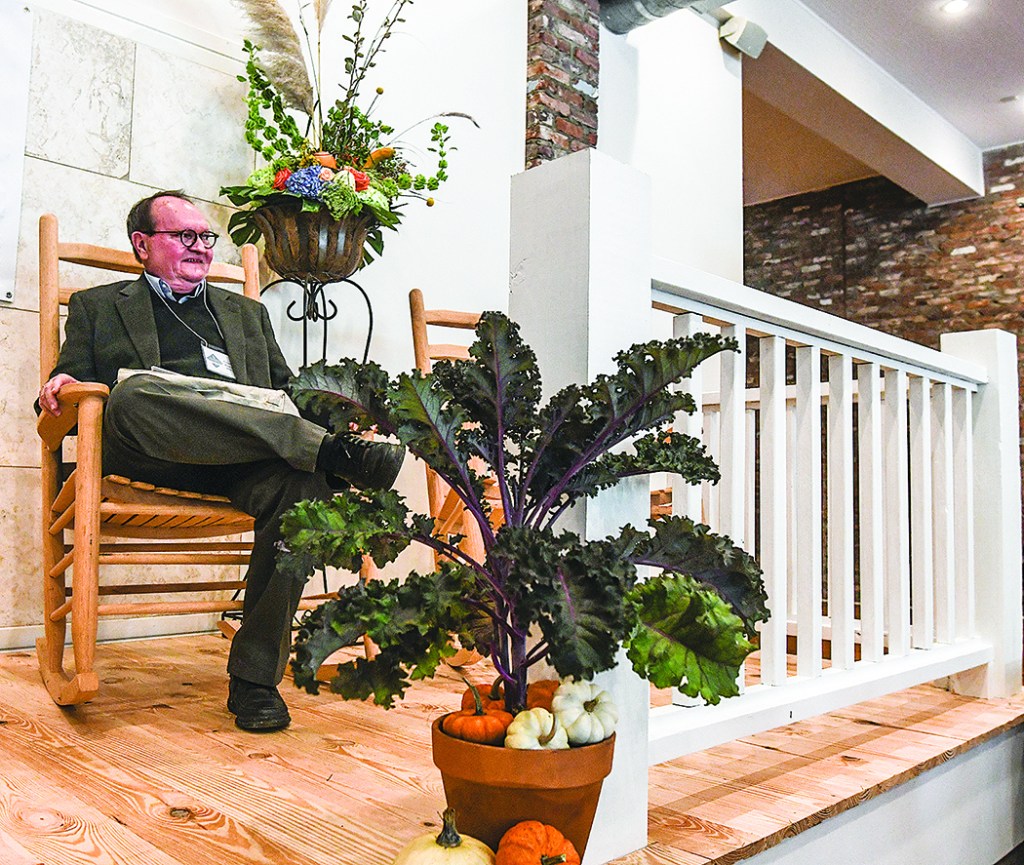 Charles Reagan Wilson sits in a rocking chair before speaking at the Conference on the Front Porch in Taylor, Miss. on Friday, October 21, 2016.

The Conference on the Front Porch, a new event held at The Mill at Plein Air, kicked off its first day on Thursday morning. The conference is centered on studying the front porch from historical, architectural and cultural standpoints.

Campbell McCool, the founder of Plein Air and the conference, welcomed attendees (which was estimated at around 40) who came from all over the country to Taylor, Mississippi for the two-day event.

“We got fascinated by the idea of the front porch,” McCool said in his opening speech. “What does it mean?”

McCool hopes that the conference will turn into an annual event and expand with each year.

The keynote speaker for the conference was Scott Cook, an amateur historian who penned a study entitled “The Cultural Significance of the American Front Porch” while a student at the University of Virginia.

Cook spoke about the history of front porches in the country and why Americans are drawn to them.

“(Those before us) told stories and shared memories on porches,” he said. “There’s a need and desire for community. On porches we can interact with neighbors and having one means you want to see people walking down the street.”

Cook went on to talk about the decline of Americans using the porch as a family room with the rise of television and the spread of automobiles.

“What had been a quiet place for family to enjoy nature began to change,” Cook said about the rise of cars throughout the United States after World War II.

He also noted that since the ‘90s there has been a resurgence of front porches and that now, more than ever, we long for community.

“We want to romanticize the past,” Cook said. “We think of it as simpler and slower. The front porch doesn’t make a difference, it’s the people that sit on it.”

The day proceeded with other lectures from architect V. John Tee who talked about the history and formation of the American front porch.

During a Q & A session moderated by American History magazine editor Michael Dolan, participants got to ask the panel of lecturers anything and everything front porch related.

One of the panel members, Crow Hollister, the founder of the Professional Porch Sitters’ Union in Louisville, Kentucky, says that communities are better off when people spend time outside with other members of their neighborhood.

“People plant flowers and children’s play ranges expand the more people move outside. The porch is the genesis of community,” he said.

Dolan agreed, saying that, “(the front porch) is enshrined as a place of activity.”

The day’s agenda continued with a double-decker bus tour of Oxford guided by historian and longtime resident Jack Mayfield and a play put on at Plein Air on the front porch of the Southern Living Idea House.

The conference continues today with more lecturers as well as a large outdoor group dinner and porch concert.