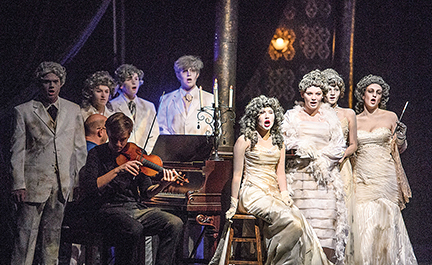 Just in time for the Halloween season, Oxford High School will be presenting “Scream Scenes,” an original modern dance production, which pays homage to classic horror and thriller cinema.

The show’s director (and head OHS theatre), John Davenport, says that “Scream Scenes” has been a recurring show for the program which began back in 2002. He says that this will be the fifth incarnation of the production.

“It’s what got students interested in the program,” he said. “The fire that was lit in the program was because of the first “Scream Scenes” I owe where the program is today to that. The last time we did one was in 2011.”

Davenport describes the show as a “dance concert that sometimes masquerades as a performance art piece.” Over 33 films are paid tribute to within the course of the running time from slasher films like “Nightmare on Elm Street” to more whimsical horror fare like “Ghostbusters”. There is also a Hitchcock inspired piece thrown in for good measure.

Even though Davenport plays a large role in directing the show, he credits its success to the students, Sallie Hardy and Ann Elizabeth Pittman for choreographing all of the pieces. In addition, student Andrew Gardner directed, shot and edited a film that is shown in different chapters throughout the night. The movie is inspired by the recent Netflix sci-fi-horror hybrid “Stranger Things”.

Tickets for “Scream Scenes” are $10 for adults and $5 for students. The production runs from tonight through Thursday at 7:30 p.m. in the Kayla Mize Auditorium at Oxford Middle School.