Preparing for another year of Operation Christmas Child 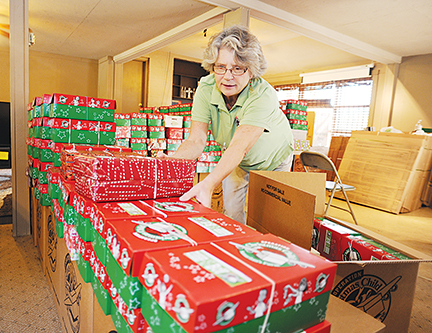 For some at Anchor Baptist Church in Water Valley, Christmas is always on their minds. Not because of the anticipation of gifts or for the holiday season itself, but rather for the opportunity to give to children in dire need.

Operation Christmas Child, a program started by the Christian charitable organization Samaritan’s Purse, ships gifts in shoeboxes to over 100 countries, along with gospel literature.

“These are children who have never gotten gifts before,” said Sidney Faye McCain, one of the three co-chairs for the project at Anchor Baptist.

“I saw it on TV and I thought, this is really neat,” McCain said. “We had some older adults that knew a little bit about it and they got me started. The first year we did shoeboxes, we had 25.”

This year, as in recent years past, the Anchor Baptist community will produce thousands of boxes.

Rita Graham, another co-chair and member of the church, says that boxes will start to be assembled as early as February or March, but that it eventually becomes a year-round process.

The boxes that are packed at Anchor Baptist will then be brought to the Wesley Foundation near the University campus and to First Baptist Church in Oxford. From there, the boxes will be loaded onto 18-wheeler trucks and shipped to processing centers in the southern region which finalize the gifts and send them off to the children in need. The collection week for 2016 will be the week of November 14. The public is encouraged to participate.

“We try to start as early as possible,” Graham said.

Graham jokes that she got “roped” into the project three years ago by McCain.

“Missions are my heart,” Graham said. “When Sidney Faye got involved with this, I thought maybe this is something I can do and it was such a blessing. The stories you hear at the processing center when somebody says, ‘when I was nine years old, I got shoes’, you just want to cry because they’ve never had shoes before.”

This year, the co-chairs from Anchor Baptist will be traveling to volunteer in the processing center in Boone, North Carolina, which is also the headquarters of Samaritan’s Purse, an organization started by evangelist Bob Pierce in 1970.

An estimated 400 volunteers at Anchor Baptist assisted with the process. Whether they’re donating items from home or coming into the church to fill the boxes themselves, the young and old are equally involved.

Cindy Andrews, the third co-chair for the Anchor shoebox project, laments that not every child in these countries will be able to receive the gifts.

“There’s never enough for the kids in the community,” Andrews said. “And my heart is with the children who aren’t able to get one.”

McCain says that the Samaritan’s Purse is only able to reach each village once every seven years, reducing the likelihood of the children being able to get a second gift.

“I think for me that when you see one box reaches so many people, that this is our way of being on the mission field without traveling,” Andrews said. “I think it’s something that we as Christians are called to do. To spread the Word. And to meet their needs in a loving way, it makes it up close and personal.”

McCain agrees that spreading the Word of the Gospel is a primary motive for her cause, yet there are other reasons she feels a profound connection to Operation Christmas Child.

“Jesus said, ‘Spread the Good News,’” she said. “This is our Good News. Children all over the world are having a chance to learn about Jesus and that he loves them and that there are people in America who love them too.”