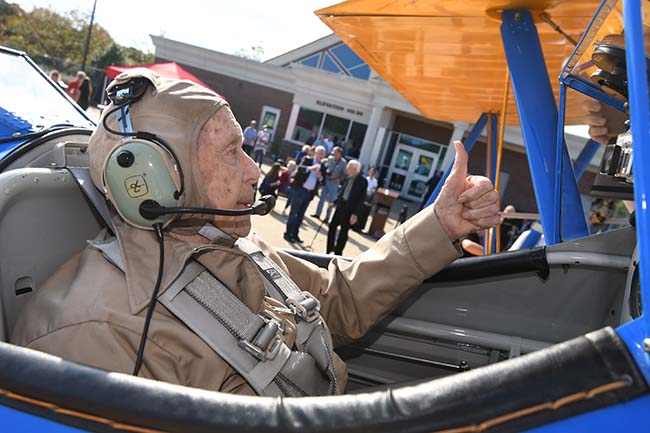 Bruce Newman World War II veteran Lloyd Smith, 93, gives a thumbs up before going up in a Boeing Stearman Biplane as part of the Ageless Aviation Dreams Foundation’s Dream Flight in Oxford on Thursday.

When 93-year-old Lloyd Smith took to the skies in an authentic open-cockpit Boeing Stearman biplane on Thursday, it had been over seven decades since the former military officer, and prisoner of war, flew in one.

Smith, an Air Corp Staff Sergeant during World War II, was the 2,000th recipient of Ageless Aviation Dream Foundations flights which honor those who have served in the armed forces and currently living in retirement communities. Smith was honored alongside Angus L. Emerson III, Ernest “Ernie” P. Aune, Bruce Burt, Frank Miller and 95-year-old Kenneth Morton, the oldest recipient of the day.

During the War, Smith’s plane was gunned down over Brunswick, Germany and crashed in the ocean 23 miles off the coast of Belgium. Smith and the soldiers with him were picked up by a German boat and held in a Belgian dungeon until they were transported to an Austrian prison camp for the next year-and-a-half.

Oxonians and veterans alike came out to the University-Oxford Airport to see the senior military officers take flight.

Ageless Aviation was started by Darryl Fisher who has been using a biplane from 1940 that his father, Bill Fisher of Salem, Oregon, owned. Bill says that the plane belonged to his father who had it restored in Cleveland, Mississippi in 1946.

“I feel fortunate to have been a part of this from the start,” Bill said. “My son said to me a few years ago, ‘I’d like to give some veterans a ride, and I’d like to use your plane’. So I let him.”

Bill also thanked the national chain Sports Clips Haircuts, who have a store opening in Oxford next year, for their longtime support of Ageless Aviation since the non-profit’s beginnings.

All of the six veterans who received a flight in the biplane are residents at Brookdale (formerly Azalea Gardens) in Oxford.

Sandra Enfinger, the Executive Director of Brookdale, says that it’s something the recipients anticipate daily when they find out they’ve been selected for a flight.

The first flight that Ageless Aviation gave in 2011 was for the senior home’s resident Hugh Newton, so they thought it would only be fitting to have the 2000th one take place again in Oxford.

“We always want to do something special for them,” Enfinger said. “They talk about it for days and days before it happens. It’s great to see their reactions when they get off the planes, they’re so excited.”

And judging by the looks on the veterans’ faces when they got off the planes, they were indeed excited.

“Can I do it again?” asked Emerson, beaming as he climbed out of the cockpit.

Likewise, Smith came back in high spirits. When asked how the flight went, he said, “It went fine. I didn’t know Oxford looked that pretty.”