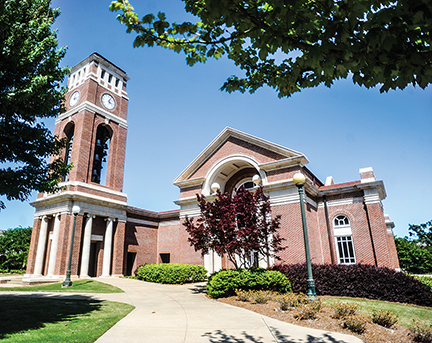 The Jewish community in Oxford is often overlooked, but now they’re becoming more prominent than ever.

On Friday, Oct. 21, The Jewish Federation of Oxford, a new organization, held its first Shabbat (or Sabbath) service in the Paris-Yates Chapel on the Ole Miss campus. In Judaism, Shabbat is the day of rest and reflection of the week that has passed.

“I begin with a prayer of gratitude for all that is holy in my life,” read the congregation of around 40 participants from prayer sheets in unison with Rabbi Henry K. Danziger of Temple Israel in Memphis, who lead the service. “God needs no words, no English or Hebrew, no semantics and no services. But I need them.”

Jews in the area

The number of Jewish people living in Mississippi is estimated at 1,550, but the culture has been entwined in the state’s fabric since its earliest days.

Jews first settled in the region along the Gulf of Mexico via New Orleans and Mobile, Alabama eventually moving into Mississippi, establishing larger communities in Natchez, Vicksburg and Biloxi.

The Jewish population peaked in the state in 1927, when 6,240 Jews called Mississippi home. Since the ‘50s there has been a steady decline of the population. But in Oxford, the founding of the Jewish Federation is strengthening the community.

The Federation began last year, but spokesperson Richard Gershon says that it wasn’t until this year that everything began to come together.

“Our Jewish community has been around for awhile,” Gershon said. “The idea behind the Federation was to have a more normalized way to provide events and educational programs for the Jewish community and for the broader Oxford and University community.”

With no formal synagogue established in Oxford, for the recent High Holidays of Rosh Hashanah (the Jewish New Year) and Yom Kippur (the Day of Repentance), Gershon says many families will either travel to Memphis to attend services or hold it in their own homes.

Gershon says that while the Federation doesn’t speak for everyone in the Oxford Jewish community, he estimates that there are currently 50 families in town who identify with the religion. But when considering the number of Jewish students on campus, it’s difficult to pinpoint an exact figure.

Rabbi Danziger is impressed at the new changes that the Oxford Jewish community has undergone and with what still lies ahead.

“It is a great step forward to declare oneself a community Jewishly,” Danziger said in an email. “That is different from simply having a Jewish population. In college towns throughout the country, others like Oxford are bringing together ‘town and gown’ Jewishly and creating real community.”

Six years ago, Ole Miss established a Hillel organization on campus as a gathering place for Jewish students to meet for prominent holidays like Hanukkah, Passover and Shabbat meals. Rebecca Streetman, the advisor for Hillel and Ole Miss alum, says that while the group is small (at around 15 students), it’s a “growing organization”.

“When I first came here in 2007 as a freshman at the University, it was very difficult for me because we did not have a Hillel,” Streetman said in an email. “There was no formal organization for Jewish students to meet. With the help of some of the Jewish faculty members in 2010, we were able to bring together a few Jewish students that were willing to start [the group].”

Even as a minority religion by a vast margin in Oxford, Gershon and Streetman both say that Oxonians have been accepting of their beliefs.

“People don’t always know a lot about the religion,” Gershon says, “but they’re curious and want to know more.”

Streetman has had similar interactions.

“Most of the time, people ask me questions about various holidays and the differences between Christianity and Judaism,” Streetman said. “Some people have told me that I am the first Jewish person that they have met.”

Danziger marvels at the tenacity of Southern Jewish communities which have lasted through the years despite dwindling numbers.

“Southern Jewish communities are, to me, like the flowers that one sees blooming out of the rocks and baked clay in Arizona or New Mexico,” he said. “They are the result of strength and determination that what has been called ‘the ever-dying people’ won’t die yet.”