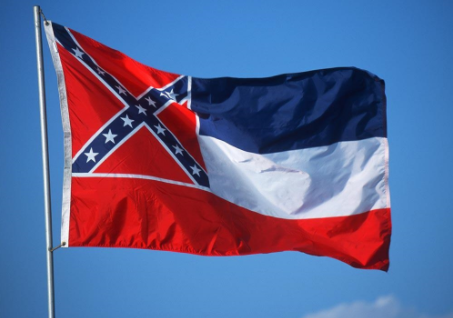 The last of Mississippi’s eight public universities is stopping the display of the state flag that prominently features the Confederate battle emblem.

Delta State University President Bill LaForge announced the decision Thursday in a news release, saying the flag has been retired to the university’s archives. See Delta State’s full statement on the flag removal below at the end of this story.

After Mississippi State University and the Mississippi University for Women lowered the flag this summer, the 3,600-student school in Cleveland was the last displaying it. Delta State flew the flag alongside American and university banners on large flagpoles at one end of its main quadrangle, facing a state highway.

Why Delta State was the last to fly Mississippi’s state flag.

LaForge says the university acted because state government hasn’t moved to change the flag. The university called for a different state banner in 2015, with LaForge saying Mississippi needs a flag symbolizing unity, not divisiveness.

Here is Delta State’s full statement on the lowering of the State of Mississippi flag from LaForge:

“Today, I am announcing that Delta State University has lowered the flag of the State of Mississippi, and will retire it to the University Archives.

“The discussion about the Mississippi flag on the Delta State campus has continued for well over a year.  The conversation increased this fall when the remaining public universities lowered their flags.

“I wish to make it clear that this university is making an institutional decision on this issue because the state government has declined to change the flag.  This is a painful decision in many respects because this is a highly charged emotional issue for many people.  The University finds itself in the untenable position of making a decision that will disappoint some, no matter the outcome.  But in the absence of state action, we are making a decision that I believe is right and just on all levels.

“In the spirit of open academic discussion, our various university constituencies — especially our students, faculty, and staff — have given thoughtful consideration to this issue.  As expected, there are differences of opinion and divergent viewpoints. However, my Cabinet and I have carefully weighed the input from all quarters, and it is now my responsibility to speak for the University on this matter.

“The objectionable portion of the state flag — the stars and bars — presents a polarizing symbol that is a barrier to progress and improved understanding of our state, our university, and our people.  Delta State recently completed a visioning process, during which we set a course of excellence for the university’s future.  Included in our visioning principles are a number of core values that we promote and embrace, including civility, respect for all, diversity, inclusion, fairness, hospitality, and a welcoming environment that is conducive to the success of our students, faculty, and staff.  We believe that continuing to fly the state flag — with its divisive symbol that sends a confusing message, at best, and that has increasingly become a distraction to our mission — is contrary to our core values and to an accurate understanding of who we are and what we stand for as a university.

“In 2015, the University announced its strong support for the adoption of a new flag by the State of Mississippi that would be a symbol of unity rather than one of divisiveness.  But, that change, unfortunately, has not occurred. So, today, I renew Delta State’s support and call for that change.

“While taking the flag down is a symbolic act, its removal, nevertheless, underscores the numerous positive things we do on this campus to advance inclusiveness, fairness, and transparency in our various enterprises.

“As the state’s most racially diverse university, Delta State is proud of its multicultural heritage and identity.  We are leading conversations and programs of action on the important topics of race relations, the Delta Blues, international business, educational advancement, scientific research, and community engagement — most notably through our signature conferences on those themes and through our outstanding academic programs. Those who study, teach, and work on this campus, as well as those who visit Delta State from around the country and the world — especially our record number of international students — deserve to know that our welcoming community and commitment to inclusiveness are not encumbered by an outdated symbol in the state flag.  And, after a 15-year ban by the NCAA, Delta State University deserves the opportunity to host swimming and other athletic championships that are currently not allowed because of the design of the state flag.

“As a public institution of higher learning, Delta State continues to honor and respect its relationship with the people and state that support this university.  That will not change merely because we choose to join our seven sister universities in solidarity in lowering a flag that contains an antiquated symbol that is offensive to so many, and that public universities are not required by law to fly.  Delta State will demonstrate its respect for the state by continuing to inspire its students and educate new generations of thinkers and leaders who will invest in this state’s future.

“I am grateful to the Delta State community for engaging in a deliberate, thoughtful, and sometimes difficult conversation about the flag.  It is now time for us to turn our full attention to the more serious matters of teaching, learning, and service at a university that is working hard to guide and educate our students, while also helping to provide vision for the future of the Mississippi Delta and our state.

“In a recent court decision involving a legal challenge to the state flag, U.S. District Judge Carlton Reeves astutely wrote: “At times there is something noble in standing alone.  This is not one of those times.  The Confederate battle emblem has no place in shaping a New Mississippi, and is better left retired to history.”

“In sum, Delta State’s decision to take down the Mississippi flag signals this university’s opposition to the design of the current flag, and sends the message to our state leadership that the time for a new, unifying state flag is long overdue. We look forward to raising a state flag that will represent the New Mississippi.  However, until that new flag becomes available, and as an added measure of respect for the state, Delta State will fly the state’s bicentennial banner that was recently unveiled by the Mississippi Economic Council.

“Taking down the state flag on this campus is the right thing to do, and it is in the best interest of Delta State University because we are working to help shape the New Mississippi.”