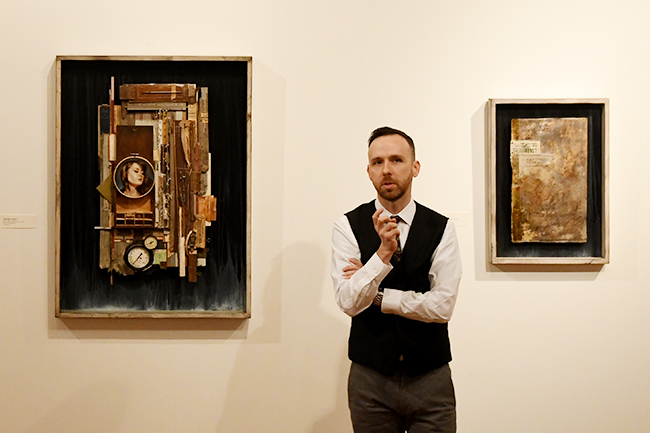 Jackson artist Jason Twiggy Lott describes his artwork in the exhibition “Apocrypha” at the University Museum as “literally trash” that he finds on the street, but his pieces go far deeper than that.

The assemblage artist puts together collages and mixed media pieces out of items that he discovers, breathing new life into discarded objects that might otherwise be forgotten.

“Discarded objects have always fascinated me,” Lott said on Tuesday night while speaking in front of his work to an audience at the University Museum. “I love collecting things and telling new stories with them. I’ve always been attracted to history.”

Lott’s artistry is inspired by Joseph Cornell, a pioneer in the assemblage genre. Lott also draws inspiration from mythology and old occult art.

“Most of those are so heavy in symbolism,” he noted. “You can just get lost in them.”

When assembling his pieces, Lott will generally leave the items as is and will only do minimal painting or writing on top of them. One of his pieces, “Death Walks on Cat Feet”, features letters and papers that he found in an abandoned home.

“It’s a part of someone’s life that would otherwise be rotting away,” he said. “In a sense, I’m honoring these people.”