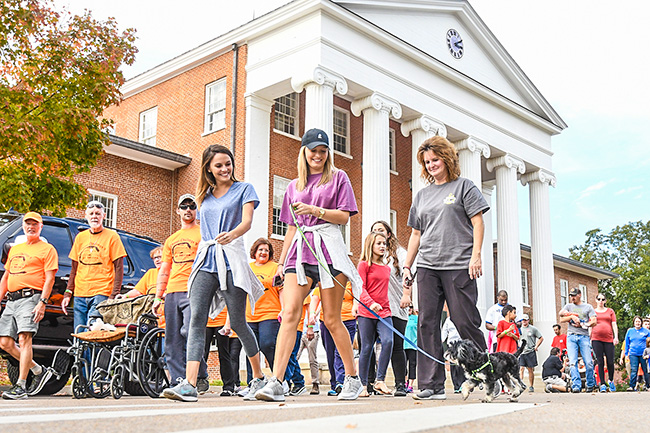 Participants in the Diabetes Foundation of Mississippi's "Mississippi Walk for Diabetes" walk in front of the Lyceum, in Oxford, Miss. on Sunday, November 6, 2016.

The Diabetes Foundation of Mississippi held a charity walk Sunday afternoon which wound its way through Oxford and the Ole Miss campus. An estimated 75 people (from toddlers to seniors) came out to support the cause.

Irena McClain, the associate director of the Diabetes Foundation, says that the walk is integral to the services that the non-profit organization provides.

“Every dollar we raise stays in the state of Mississippi to support our programs and services,” she said.

McClain says some of these services range from patience assistance programs to classroom initiatives to educate teachers who may have students with diabetes in their classrooms.

“We try to educate everybody,” she added. “Too many times when a child is diagnosed with diabetes, parents are blind-sided. They think, this is it, my child is going to be an invalid. Nothing can be further from the truth. We call them ‘can-do kids’, they can do anything that they want in life.”

McClain cited an ER doctor who is on the foundation’s board who lives with type 1 diabetes and multiple firefighters she knows who also have the disease.

According to the Mississippi Department of Health, in 2012, the state ranked second in the nation in terms of diabetes prevalence; over 276,000 adults have type 2.

Apart from seven annual walks, a charity ball and numerous informational meetings about the disease, the foundation organizes Camp Kandu, an event held twice a year for children with diabetes. The November camp will be held next Saturday in Florence.

McClain, who is now in her 23rd year with the foundation, has a personal connection to the disease as she lost her brother to it five years ago.

“These walks mean a lot to me,” she said. “It’s great to see kids, seniors and everybody walking together for diabetes. It’s a nice show of support.

“Diabetes can be associated with depression, and I think it’s so empowering for them to see all this support out there.”