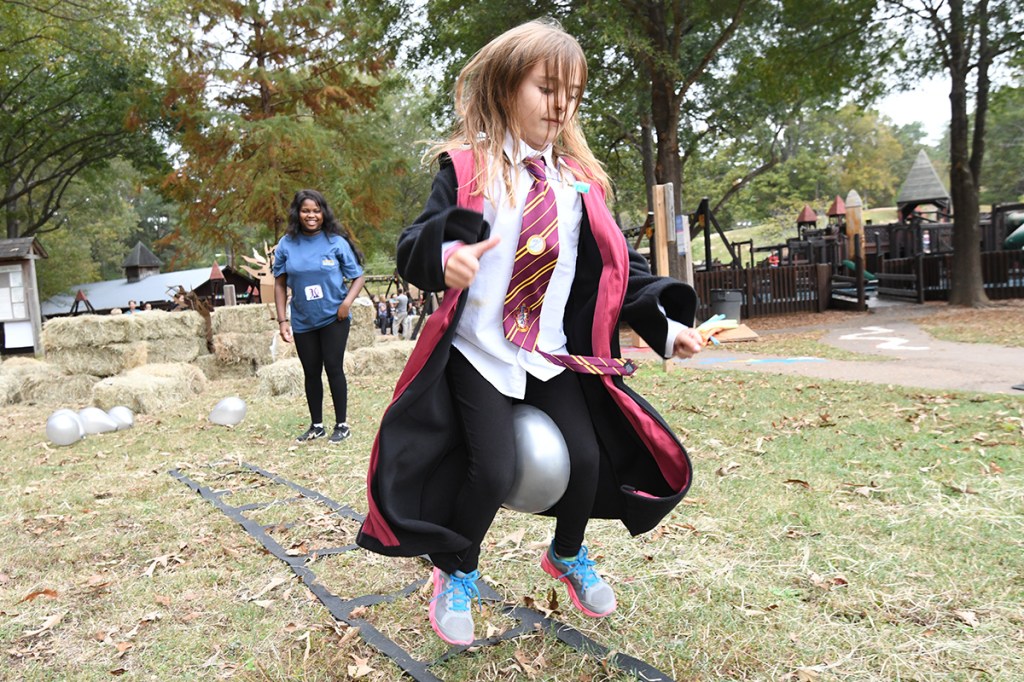 Elizabeth McLellan as Harry Potter character Hermione goes through an obstacle course during the first "Wizarding Walk" at Avent Park in Oxford, Miss. on Monday, November 7, 2016.

Young wizards and witches roamed the grounds of Avent Park late Monday afternoon. They chased each other with homemade wands while wearing black cloaks and shouting spells. The park, which had been transformed into Hogwarts School of Witchcraft and Wizardry from the world of Harry Potter, hosted magical activities as a part of the Wizarding Walk to encourage reading.

This marked the first year for the event which was sponsored by the Yoknopatawpha Arts Council and United Way of Oxford-Lafayette County (among numerous others).

Meaghan Gallagher, the outreach and education coordinator for the Arts Council, says the concept came to her after walking through the park with her six-year-old son.

“We had just read one of the Harry Potter books and my son asked if he could give me a tour of Hogwarts as he took me through the playground,” Gallagher said. “So it was his idea; I just held on to it. His imagination brought it to life for me, and then I thought, can we do this? I feel like I can. It wasn’t a hard sell. All of the organizations here were so happy to participate.”

Edy Dingus, the programmatic VISTA (Volunteers in Service to America) for United Way of Oxford-Lafayette County, says that the event looked to reinvigorate the Avent Park space.

“So many families come in and out of here every day and they’re used to it,” she said. “This was a way to make it another world and help spice up the imagination.”

The activities at the park included getting sorted into one of the four Hogwarts houses with a makeshift sorting hat and snacks at Hagrid’s Hut (provided by Good Food for Oxford Schools). “Fantastic Creatures” (bunnies and naked rats from the Humane Society) also made an appearance much to the delight of the child wizards.

Next year will mark 20 years since J.K. Rowling’s “Harry Potter and the Philosopher’s Stone” first made an appearance on British bookshelves (with its American release the following year) and the popularity of the series has not waned. If the excited children on Monday afternoon proved anything, Potter interest remains high.

Gallagher can’t pinpoint exactly how the series has stayed so well-liked, but she has her theories.

“I think the books are still popular because everyone has to go to school,” she said. “And this is a school where all the possibilities of your imagination are actually real.”