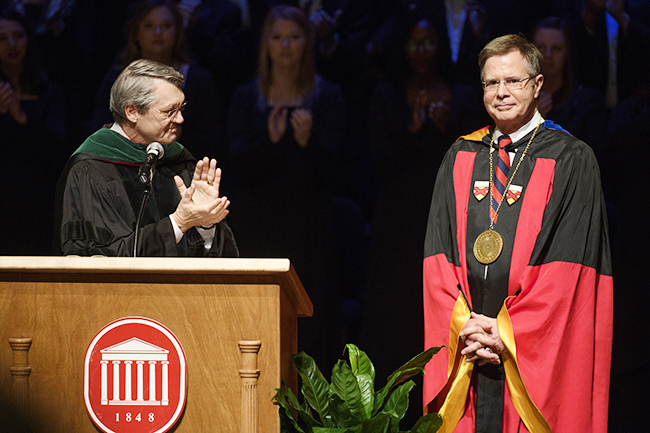 Chancellor Jeffrey Vitter was officially inaugurated as the 17th chancellor of the University of Mississippi in a ceremony Thursday at the Ford Center on campus.

Before Vitter officially accepted the position, there were numerous speakers who praised Vitter and welcomed him into the role and community.

Senator Thad Cochran was among the speakers on hand.

“I’m confident Chancellor Vitter will lead us to new heights,” he said.

“He’s committing to ensuring that the university will meet technological challenges in the future. I look forward to seeing Ole Miss prosper and grow under his leadership.”

When the time eventually came to officially take on the mantle, Vitter was asked if he was ready to take on his responsibilities.

“I am privileged to be your partner in building a better Mississippi through higher education,” Vitter said during his speech. Thank you for readily welcoming me and my family (into the Ole Miss community).”

In particular, Vitter praised his wife, Sharon, and said he would not be where he is today without her support.

“I chose to be an academic leader, because I’m passionate about the power of higher education,” Vitter continued. “What does it take for our university to go to the next level? What should change? What shouldn’t change?”

Vitter then spoke about what Ole Miss represents to him.

“At our core, Ole Miss is a family,” he said. “It is in our DNA to get students to succeed. Ours is a large and extended family. One never graduates from Ole Miss.”

The Chancellor went on to praise the alumni network and said that this year broke records in donations. He also spoke about diversity on campus and a promise to keep striving for more of it during his tenure.

“Excellence and diversity go hand-in-hand,” he said. “Diversity makes our ideas better, our relationships deeper. We will serve as a guide to the nation in learning from our past and creating a vibrant future.”

In closing, Vitter looked ahead to the future of the campus.

“We are so proud to be Ole Miss Rebels,” he said. “It is our calling to transform lives, communities and the world. Just imagine what we can do.”