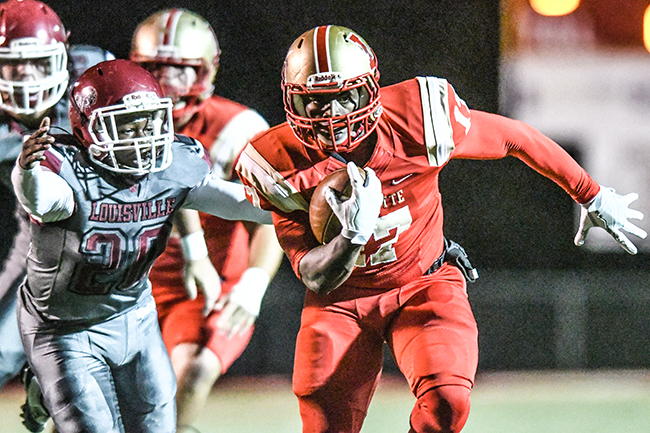 The Lafayette Commodores’ win streak is alive for another week. On Friday at William L. Buford Stadium Lafayette beat the Louisville Wildcats by a score of 24-7 to advance to the quarterfinals of the MHSAA class 4A playoffs next week. Lafayette will host Amory, who defeated Cleveland 20-14.

Lafayette head coach Michael Fair was proud of the effort his team showed against a Louisville team he felt was much-improved from the last time they faced the Commodores.

“I thought the guys played really well,” Fair said. “I love the way we’ve prepared for these playoff games. Guys really coming to work every day and practicing well, I thought we had great effort tonight.”

The first quarter was a defensive battle, with the Commodores (10-2) struggling to move the ball through the air or on the ground. Quarterback Will Ard started off slow, failing to complete his first five passes. The Lafayette defense, however, started off strong, as they forced a fumble on the very first offensive play of the game. As the quarter was winding down and both teams were still scoreless, Xavier Martin picked off a pass and gave the Commodore offense solid field positioning at the 44-yard line.

Lafayette’s offense was able to capitalize, moving down and scoring a 22-yard touchdown on a pass from Will Ard to Tyler Carmichael-Williams right as the first quarter expired. From then on, it was Lafayette’s game to lose.

“Sometimes it seems to take us a while to feel our way through,” Fair said. “We’ve come in with a game plan and didn’t execute it quite like we wanted to, but we were able to go back to some fundamental stuff that we usually do no matter what and get a few first downs then sprinkle in some of this other stuff. So I think we found a groove there for a while and really felt good about moving the ball.”

“That’s a matchup that we like on the edge,” Fair said of Carmichael-Williams’ performance. “When they stack the box like they do and have a lot of guys in there trying to stop our run it opens up some things in our passing game, and Will Ard does a tremendous job of putting it where only he can catch it.”

While the offense wasn’t quite as sharp as it was in the first round of the playoffs, the Commodores more than made up for it with strong defensive play, forcing Louisville (7-6) to turn the ball over on downs multiple times and holding Louisville scoreless until there was just 5:34 left in the fourth quarter.

“Coach Ashley has these guys flying around, playing great defense,” Fair said. “I think what a good defense does it, they don’t go out there and think they just react and play, and that’s what he’s got our defense doing right now. Couldn’t be more proud of them and the job that he’s doing.”