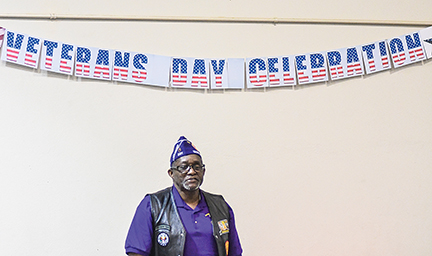 Bruce Newman Harold Hervey of the Military Order of the Purple Heart, Chapter 801 speaks at a Veterans Day program at the National Guard Armory in Oxford, on Friday.

A Veterans Day celebration was held at the National Guard Armory in Oxford Friday, honoring the men and women who have served the country from all branches of the military.

The Oxford Middle School band and singer Dolores Swann provided musical entertainment before speeches were given about the importance of veterans to the country.

“We take for granted the sacrifices the men and women in this room have made,” said the first speaker, County Supervisor Jeff Busby. “They gave us the freedoms that we have.”

The keynote address was given by Ret. Brigadier General James Edwin Mitchell who gave an emotional speech and explained that his ties to Oxford run deep. He first came to town in 1964, from the Tupelo area, to attend the university where he eventually met his current wife of more than 50 years. While Mitchell served in Vietnam, his wife remained in Oxford.

“This place means a lot to me,” he said. “These veterans mean more to me than you can imagine.”

He noted that there less than 7 percent of people in the United States are veterans.

“Think about how special that makes you,” Mitchell said. “You are the heart and soul of this country. You stepped forward in a time of need. You are common Americans with an uncommon patriotic commitment.”

Mitchell also said that no matter the branch of the military a veteran served in, they all have similar attributes.

“We can proudly say we’re all veterans and we defended this great nation,” he said. “The oath I took is the same one you took.”

He closed his speech by thanking Oxford for supporting him through the years and that he doesn’t regret a moment of his service.

“You’ve been my home away from home,” Mitchell said. “If I could, I’d do it all over again.”