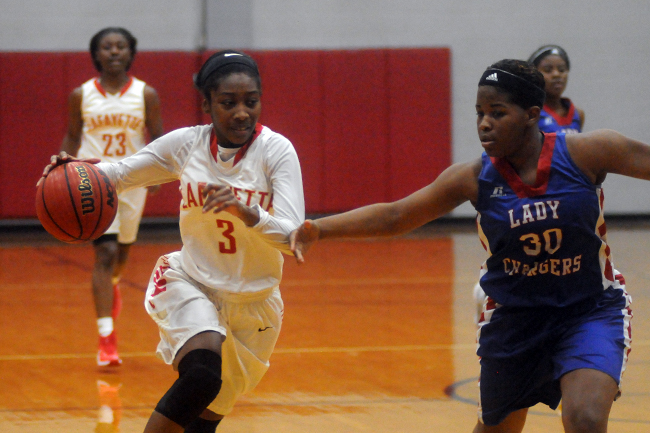 Lafayette’s key player was not at her best Tuesday night, but that was not a concern for the Commodores as they defeated Grenada 44-36 inside the LHS gym.

Shaniyah Buford was held to six points, but Lafayette (3-0) used strong first and third quarters paired with stout defense to hold off Grenada.

“Shaniyah, yes, she’s our calming presence,” Lafayette coach Shayne Linzy said. “She can take over a game, absolutely. But with other people able to score, we become a more balanced team. People may still concentrate on Shaniyah, but we’ve got other girls who can take over a ballgame and win a ballgame for us.”

With Buford struggling, it was fellow senior Orianna Shaw who picked up the slack, scoring 11 points and nine of them in the third quarter.

The Commodores had a strong start, jumping out to a 17-11 lead after the first eight minutes of play. After a slow second quarter offensively, Lafayette used a 15-3 third quarter to stretch out to a 37-20 lead with one quarter left to play. The second and fourth quarters were not bright spots for the Commodore offense as they were outscored 22-12 by Grenada.

“The second and fourth quarter felt like we were forcing some shots,” Linzy said. “In the first quarter, we came out and played well and kind of got a feel for them. In the third quarter, we made the decision to go to our press. When we did that, even if they broke it, there were turnovers happening. We picked the pace up a bit.”

The Chargers proved to be tough to put away, mostly in part of the play of sophomore Dyaneice Woodall. Woodall made life difficult for Lafayette in the paint, posting up and using her size to score a game-high 16 points to keep the Chargers in the game.

“(Woodall) did a fantastic job of posting up,” Linzy said. “Our defense was there, but when we got caught out of position, she did a great job taking advantage of it. That’s where she was getting her points. When we got out of position, Grenada noticed it.”

Xhiir Burgess finished with nine points behind Shaw while Mariah Holland led Lafayette with nine rebounds, with six of them offensive boards. Holland had five points of her own.

Time away
It will be 14 days before Lafayette will take the court against someone else. The Commodores do not play again this week and are taking the Thanksgiving holiday off besides some scheduled practice and open gym times during the week. Lafayette’s boys and girls teams return to action on Nov. 29 when they travel to North Panola.