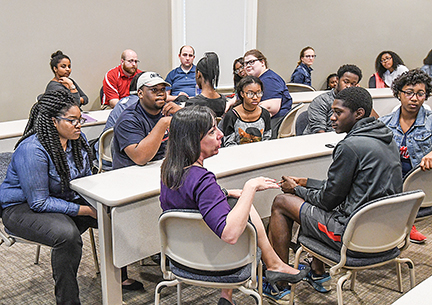 Bruce Newman Participants speak about the presidential election and other issues at Bryant Hall on Wednesday.

After last week’s election, many students on the Ole Miss campus have sparked debate, from both sides of the political spectrum, about its outcome and the future of the country.

In response to this, the university held a community-wide conversation called “Confronting Hate: Processing and Challenging Post-Election Bias and Racism” to discuss some of the sensitive topics that have been on students’ minds.  The event was co-sponsored by the Center for Inclusion and Cross Cultural Engagement, the Associated Student Body and the William Winter Institute for Racial Reconciliation.

The well-attended forum was divided into smaller focus groups so that attendees could talk about the issues more intimately.

“We are here to try and process some of the events that have happened on campus and across the nation after the election,” Jennifer Stollman, the Academic Director of the Winter Institute who hosted the conversation, said on Wednesday evening. “We do this to make sure everyone has a chance to talk.”

She emphasized the sense of community that Ole Miss strives to foster.

“A good community listens to its members,” she said. “We rise and fall by the empathy we show each other.”

Some of the questions posed to the discussion groups included why students felt anxious after the results of the election and how they think it might affect their lives directly.

Many students were concerned about the rhetoric that was used throughout the campaign from either political party. Others expressed anxiety at the thought of President-elect Donald Trump not having any prior political experience.

“It was a big surprise for many due to the polls,” another student added. “A lot of people thought Hillary would win for sure.”

Incidents on campus were also discussed, including the recent swastikas that were found in an elevator. Students were also upset by what they perceived as the “normalization” of hate speech during the past election cycle.

The groups were also asked why they thought that recent protests and certain acts of violence had broken out after the election.

“Marginalized people feel like they haven’t been heard in so long that they feel they need to do a drastic action,” offered Lanie Anderson, the assistant director of the Baptist Student Union.

“We can’t think in terms of oppressor and victims, because we can all be both,” Stollman told the room. “We need to learn not to teach just tolerance, but learning how to value someone too.”

By the end of the conversation, students arrived at certain conclusions about the day’s events.

“Even if you do disagree, there are ways to meet in the middle,” said Michelle Licci, a senior in the Pharmacy School.

Many agreed that simply discussing topics candidly made them feel more at ease.

Though newly inaugurated chancellor Jeffrey Vitter was unable to attend due to an IHL board meeting he wrote in a letter yesterday that, “we will continue to foster the necessary conversations and actions to address the challenges facing us.”