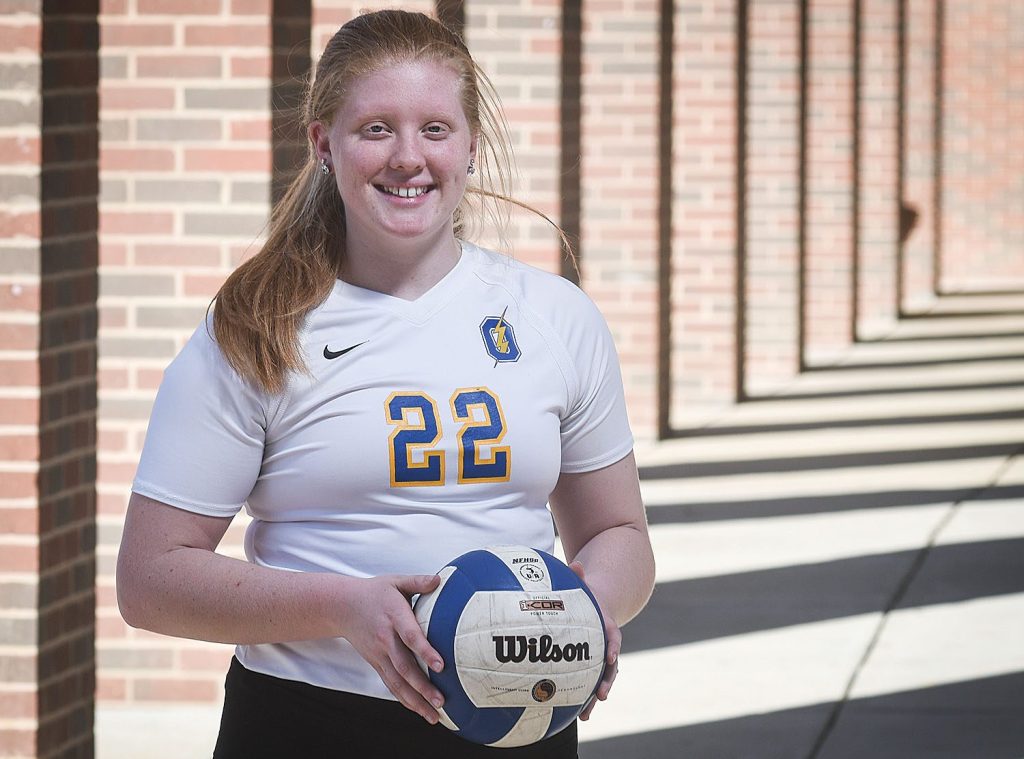 When Maggee Hobson transferred to Oxford before her eighth-grade season in 2012, she had the skills and the physical components to volleyball, but former Oxford coach Tara Ross saw her and helped her work on the mental aspect.

Five years later, Hobson put all three phases together for a complete and dominant performance in her senior season. It helped lead the Chargers to their first state title in 18 years and earned Hobson the EAGLE Player of the Year.

Hobson recorded a team-high 278 kills in 38 matches and 91 sets played, good enough for 10th-best in the state. She also finished with 112 aces. Hobson was more than 20 kills better than Jordan Freeze, who was next with 255 on the year. The offense ran through Hobson as the power she possessed in her right arm proved to be the key weapon for Oxford. She was not always the killer threat for Oxford as she had to learn to harness her raw power, which Ross helped with.

“I think it all kind of clicked probably my sophomore year,” Hobson said. “At the end of the school season, it just clicked. I knew I had to jump higher, and I just put in the work to jump higher and get the ball down and use the power and the skill that I knew how to use.”

During her sophomore season, Hobson recorded 132 kills, nearly 50 better than the next player. The evidence of her power clicking between her sophomore and junior season was proven when she racked up 338 kills last year, 123 more than anyone else on the team. Her kills were down this year as Oxford played in less sets due to the Chargers winning 3-0 multiple times. Her highest kill count this year came in the Class II state championship against Lewisburg when she piled up 18 of them.

“She’s always had the skills,” Ross said. “Now she didn’t have the vertical in eighth grade that she does now, so she hit as many balls in the net as she actually got over the net. She has come such a long way just as an athlete. … She was a great offensive weapon.”

It turned out to be both Hobson and Ross’ final season with Oxford as Hobson is graduating and Ross announced her retirement as a coach after the season. Ross knew she was going to make this her last season but tried to keep it away from her players as to not cause an unwanted distraction from their goal at hand. Hobson started getting the feeling this would be the last time Ross would take the volleyball court inside the OHS gym.

“I think last year at the end of the year, I kind of knew,” Hobson said of Ross’ retirement. “She’s like a second mom to me. She was one of the very first people I knew when I moved to Oxford. … That last point when we were playing state, I just pointed at (Ross) and she just started crying.”

Hobson has not signed with a college and does not have any offers as of now, though she is forgoing her senior season of basketball at Oxford to focus on volleyball and is playing with a club team in Memphis to help herself get noticed and possibly find a team to play for at the next level.

Joining Hobson on the EAGLE All-Area team are Charger teammates Jordan and Ragan Freeze. Jordan proved to be a viable threat on the other end of the net to Hobson this season. If Hobson was not able to finish a point, the ball could be passed over to Jordan, who was just as capable of putting it away. Along with her kills, Jordan recorded 83 aces and a team-high 12 blocks.

“I think that’s huge,” Hobson said of having Jordan this season. “She didn’t play that position last year, but having me and her being able to just pound the ball made our offense go. For me personally before that, every set was coming to me. Which I don’t mind, but when I’m out of the game, she really stepped up and took care of the offense.”

Jordan moved to outside hitter this season, moving from setter her sophomore season last year. She increased her kill count by 147 from last year to this season because of the position move. Jordan also led the team in assists with 388.

“She is a great setter and has been for years, but this year she got to hit,” Ross said. “She really is a great hitter. It was almost like it would be in tandem. The defense for the other team would be like, ‘Well, do you put your best blocker on (Hobson) or do you put your best blocker on (Jordan)?’ If you put it on Maggee, she would just set Jordan.”

If the ball got past the duo of Hobson and Jordan, Ross felt good with Ragan in the backcourt as her libero to keep the ball from finding the court. Ragan recorded 378 digs, nearly 200 more than any other Charger. She also recorded 55 assists and 15 kills.

“What can you do if you have someone who can’t get a ball up?” Hobson said. “You have to have a defense before you have an offense. In volleyball, you have to dig a ball before you can smash a ball in their face. I think that was really in important in having a good libero.”

The Commodores had a season which saw them finish as co-champions of Region 4-Class II with Caledonia and reach the playoffs before being eliminated by Oxford in the first round. Two key pieces to Lafayette’s success were seniors Orianna Shaw and Kirkland Pruitt, who represent the Commodores on the All-Area team.

Shaw recorded 256 kills to lead Lafayette and was inside the top 20 of kill leaders in Mississippi. She was also a force at the net for the opposing offense as her 5-foot-10 frame helped her earn a state-best 187 blocks. It is the second straight season she led the state in blocks.

“Any time you have someone who’s tall like Orianna but also incredibly athletic and willing to do whatever it takes to win, you’ve got a player who can do some phenomenal things,” Lafayette coach Clint Jordan said. “She wasn’t even in the top 50 in kills a season ago, which shows her growth as a player. She was our go-to player. Last year, that wasn’t the case. Just to see her mature and get better and better, that makes this job worth it.”

Pruitt was a reliable libero for Jordan and helped keep Lafayette in games with her team-best 292 digs, 152 more than any other Commodore this season and 68 more than her junior year. Pruitt also had 69 aces, finishing second behind fellow senior Cara-Anne Sallis’ 79, and picked up 23 kills.

“Our defense was designed, because of our blocking, to force the ball to go to Kirkland,” Jordan said. “You always want to force the ball somewhere. She had an excellent year. She’s an excellent passer and she’s very strong. … A lot of that can be attributed to that she’s a very good soccer player and she has to anticipate and make sure that she’s where she’s supposed to be.”

Pruitt was a reliable libero for Jordan and helped keep Lafayette in games with her team-best 292 digs, 152 more than any other Commodore this season and 68 more than her junior year. Pruitt also had 69 aces, finishing second behind fellow senior Cara-Anne Sallis’ 79, and picked up 23 kills.

“Our defense was designed, because of our blocking, to force the ball to go to Kirkland,” Jordan said. “You always want to force the ball somewhere. She had an excellent year. She’s an excellent passer and she’s very strong. … A lot of that can be attributed to that she’s a very good soccer player and she has to anticipate and make sure that she’s where she’s supposed to be.”