Oxford artist has been painting for 40 years 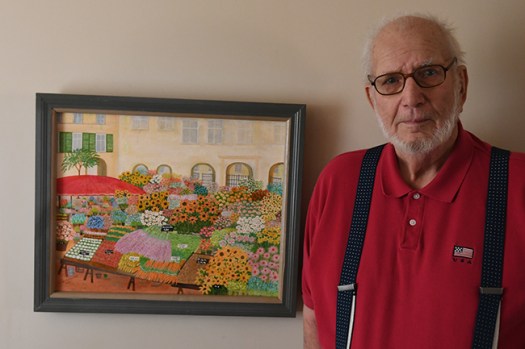 Dirk van Oostendorp poses with one oh his paintings, in Oxford, Miss. on Wednesday, November 16, 2016.

Dirk van Oostendorp, 82, has always had a keen artistic eye for his surroundings.

Recently, one of his paintings, “Walk of Champions” (featuring the famous locale on the Ole Miss campus), was chosen by the Lafayette County Chamber of Commerce to be the 15th print in their annual artists’ series.

When Oostendorp first immigrated to the United States in 1957, he settled in upstate New York and began working on tugboats. During his off time, when he wasn’t reading books from the small libraries onboard the ships, he began to paint.

“I bought one canvas when I started,” Oostendorp remembers. “I must have used it about 20 times, just to get the feeling of it. I’ve been painting now for 40 years.”

He began his painting career capturing the boats around him and eventually he moved on to the rural neighborhoods of upstate New York as inspiration.

“Everything eventually wound up under the bulldozer, these old barns and dairy farms,” he says, “I painted them before they got knocked down.”

When Oostendorp moved to Mississippi in 2004, he followed a similar path with his art, painting pictures of barns along Highway 7. Oostendorp, who is also currently pursuing a degree in creative writing from the university, got the idea for his “Walk of Champions” painting one morning in 2013 while driving through the campus.

“The sun was coming up right by the Walk of Champions and I said, ‘wow, there’s a picture,’” he said. “I took a couple of pictures to keep the light that way and I made a few sketches and took them home and painted it.”

No matter where Oostendorp is living, he can find inspiration from anything.

“Every area inspires me as an artist,” he said. “When I look around, I see places and things; it isn’t just one thing that catches me.”

When asked what he likes best about Oxford, Oostendorp responded that he relishes in the fact that he hasn’t had to pick up a snow shovel in over ten years.

Prints of Oostendorp’s “Walk of Champions” painting can be purchased from the Chamber of Commerce office for $25.