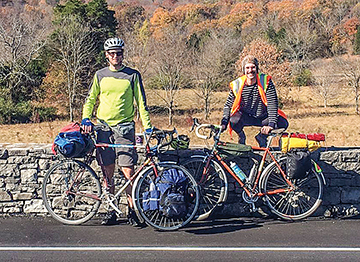 Adam Vinson and Charlie Wildman are making the 300-mile bike ride from Nashville to Oxford to raise funds for the local United Way. The Ole Miss alums are calling their trek Rebels Ride United.

When longtime friends and Ole Miss alumni Adam Vinson and Charlie Wildman go for a bike ride this week, it will be far from an ordinary trip.

The pair will be biking 300 miles along the Natchez Trace from the Rebels’ game in Nashville against Vanderbilt and arriving in Oxford for the Egg Bowl on Saturday. All the while, they’ll be raising funds through the United Way of Oxford and Lafayette County who will be supporting organizations who provide Thanksgiving meals for underprivileged households.

The idea for the campaign, #RebelsRideUnited, came from Vinson, 32, who has wanted to bike the Natchez Trace for a long time. Wildman, 31, on the other hand, has been a longtime biker and has completed trips that span thousands of miles.

“We both never had time to do something like this,” Vinson said. “The idea just popped into my head.”

“We talked about doing the Trace for a year and a half,” Wildman added. “Between work and school, it’s hard. Adam said, ‘I’m looking at the Ole Miss football schedule and what do you think about doing Nashville to Oxford?’ I thought, we could absolutely do this.”

Both Vinson and Wildman currently live in New Orleans and both attend graduate school for engineering degrees while working full-time jobs. And they’ll certainly have their hands full on the road.

“My idea is to put the mileage in from 7 a.m. to noon and then work from about noon to 5 or 6 p.m. and then do schoolwork after that,” Wildman said. “We’ll get to a place for food and an internet connection. I’ll have my computer with me.”

Vinson, who is from Oxford, said he decided upon the United Way as the organizer for the ride because of their deep ties to the community.

“I’m familiar with the United Way from high school and they do good work,” he said. “I knew people who worked for them. It was easy for me to be confident about it. Whatever money we raise will stay in the Oxford community.”

He also praised the educational work the organization does for school children.

“I did Teach for America and got very into educational reform,” Vinson said. “Knowing they do work for underserved kids was a big draw for me as well.”

Kathy Williams, the Associate Director of the United Way of Oxford and Lafayette County says that it’s been a good experience working with Vinson and Wildman.

“I was thinking it was going to be this little bike ride, nothing major,” Williams said. “The more we talked, the more I realized this could be something big. I told Adam that we should talk to the University. So we met with Ross (Bjork) and he and the whole athletic department were all on board. They decided  (Vinson and Wildman are) going to be on the field Saturday during the game.”

To find out more about how to make donations to the cause, text “RebelsRide” to 71777 anytime or during the Egg Bowl. Donations of any amount can also be made at https://app.mobilecause.com/vf/RebelsRide.

The United Way Facebook Page will also be making daily updates of Vinson’s and Wildman’s progress leading up to their arrival at the Egg Bowl. The campaign will be running through this upcoming weekend.