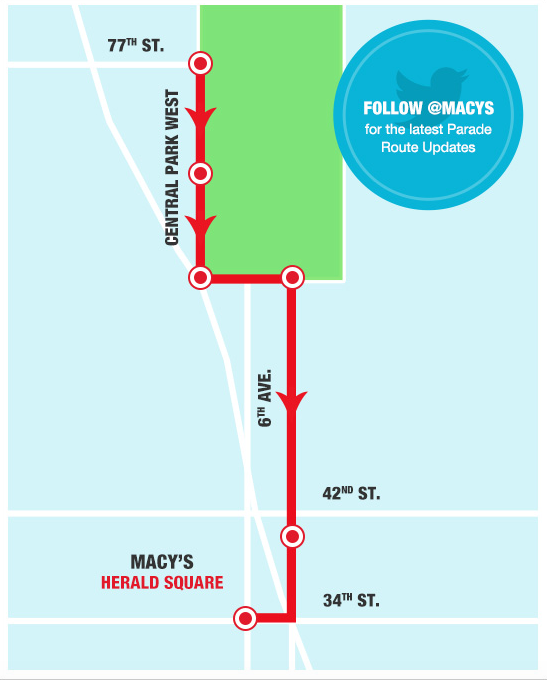 If you want to watch in person you will be among an expected 3.5 million who crowd along the streets in Manhattan to watch the parade. Some wonder if it is safe, and while there have apparently been no specific threats this year the city of New York is protecting against terror threats. (see below).

But the Macy’s Thanksgiving Day Parade 2016 route map is available here above, and it provides 2.5 miles of parade route for viewing along the streets. Grandstand tickets are not available to the general public, however, since those have been sold already to corporate sponsors.

Fans of the Macy’s Thanksgiving Day Parade who come to see the soaring SpongeBob and Snoopy balloons may get a far less heartwarming sight this year: giant dump trucks filled with sand.

More than 80 city sanitation trucks will be used at intersections and other strategic spots along the 2 ½ mile parade route to create an imposing physical barrier to terror. The trucks weigh about 16 tons empty and up to twice that with sand.

“You can ram a New York City Sanitation Department sand truck with a lot of things, but you’re not going to move it,” said John Miller, the New York Police Department’s top counterterrorism official.

While the trucks have been used like this before — most recently to protect Trump Tower — the New York Police Department says they will play a bigger role at this year’s parade in the wake of the cargo truck attack in Nice, France, that killed more than 80 people and a recent posting in an English-language Islamic State magazine that called the parade “an excellent target.”

As scary as that sounds, authorities say there’s no confirmation of a credible threat and they have repeatedly urged spectators to not stay away.