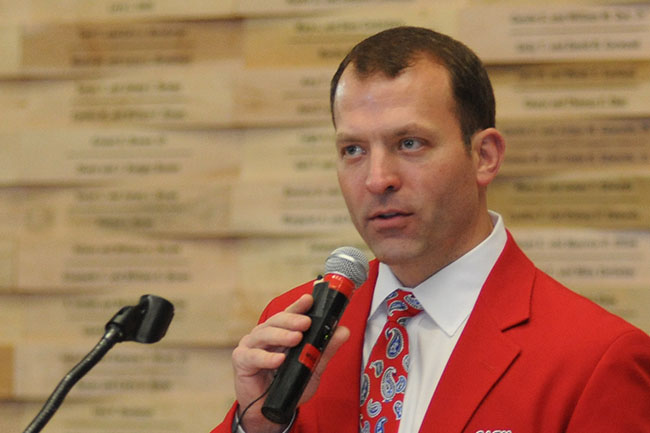 In an address to Ole Miss’ fan base, Ross Bjork expressed frustration with the football team’s first losing season in Hugh Freeze’s five-year tenure and said “not a single coach, staff member, student-athlete or administrator is content with the results of this season.”

The Rebels’ athletic director also said the school is ready to help Freeze make the kind of changes he sees fit to turn things around.

“It’s hard to believe the football season went by so fast and has now come to an end,” Bjork wrote in a letter Monday. “With a new normal being established, it is also difficult to believe the Rebels will not be going to a fifth straight bowl. Less than a year ago, (head) coach (Hugh) Freeze and our team were hoisting the AllState Sugar Bowl trophy in New Orleans.  In 2014, the Landshark defense was No. 1 in the nation, allowing only 16 points per game. I could go on with recent accomplishments under Coach Freeze, but you know them already and that’s what makes this season disappointing.

“All of us who work for your athletics program embrace high expectations. We signed up for this, and it is what makes Ole Miss a special place.  We have all come to expect excellence, and that’s a game changer for our culture and fan base.”

The bulk of the struggles stemmed from the worst defense Freeze has had during his tenure. It bottomed out in the blowout loss to Mississippi State that saw the Rebels give up season-highs in points and rushing yards (457) in their worst Egg Bowl loss since 1916.

The Rebels are looking for a defensive coordinator following the retirement of Dave Wommack, and there could be more staff changes coming. Bjork said there shouldn’t be any limit as to who Freeze can hire.

“The search for a defensive coordinator is in full swing, and we have all of the resources to hire the best and brightest leader for our defense,” Bjork wrote. A call placed to Bjork by the EAGLE seeking clarification on exactly how much money Ole Miss could pay a coordinator has not been returned.

“I assure you we will be relentless about getting back to the same trajectory of the previous four seasons,” Bjork wrote. “That plan and direction is built on a solid foundation that includes momentum across the entire university, enhanced athletic facilities, more financial resources than ever before, a confident fanbase and a commitment to excellence in all facets of our athletics program.  None of those things are going away, and I can commit to you that we will not quit or let one season rattle our foundation.  We are building a program to last.”

Bjork also addressed the NCAA’s ongoing investigation, which recently took its latest turn when administrative assistant Barney Farrar was placed on administrative leave. An interview with Farrar has reportedly been delayed as the NCAA tries to corroborate claims made by Mississippi State linebacker Leo Lewis of violations made by Ole Miss during his recruitment.

Bjork said it wasn’t the right time to comment on the status of the case.

“We know how difficult and frustrating this case is for our program and the Ole Miss family,” Bjork wrote. “Rest assured, we have every resource at the table, but we will not make this a public campaign. At the appropriate time, we will be able to share more about the process and the steps we have taken along the way. We are trying to reach a conclusion, and no one wants to see the end more than I do.”

Bjork also wrote that season ticket holders will be emailed the school’s annual fan experience survey within the next two weeks, a chance for fans to provide feedback on their experience at the newly renovated Vaught-Hemingway Stadium this season.

“With any construction project of this size, there are growing pains,” Bjork wrote. “We want to know about your experience in an organized way so we can make the experience better in 2017.”