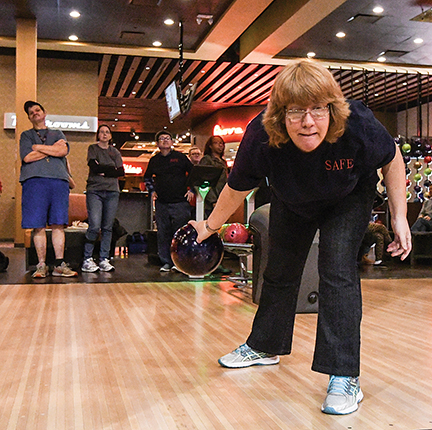 Bowling is a sport that can accommodate everyone, and now with the start of “Let It Roll,” a program run by the S.A.F.E. group (Self Advocacy For Everyone), those with special needs can take part in the game, too.

“Let It Roll” meets the second and fourth Wednesday of every month at 9:30 a.m. at Premier Lanes in Oxford (with the exception of December when it will just be the second Wednesday). The league will be meeting through March with a banquet scheduled for April where awards will be given out for everyone’s best score.

Dawn Dziduch, a co-advisor for the Lafayette County S.A.F.E. chapter (along with her husband Steve), says the idea for the bowling league happened back in October during the Special Olympics.

“We ran into people there and we knew there was an interest,” Dziduch said. “The bowling alley has been really helpful, reducing the cost per game and giving us free shoe rentals.”

Dziduch notes that any adult with disabilities is welcome to join the fun at the alley as long as they have their own transportation. She says that S.A.F.E. is working toward providing a transportation system for the group.

January will mark the two year anniversary of the self-advocacy group which Dziduch says is the only one of its kind in the state.

Dziduch credits other members of the Lafayette County S.A.F.E. who assist with the programs including Heather Bouchillon, Mason Buckner and Chris Willis.

“The bowling league is a place to have people of like situations, be successful despite what their disability might be,” Dziduch said. “You smile, you laugh, it’s just a very joyful time. I have a daughter with special needs and it’s a chance for her to make friends, because they do things outside of here once it ends.”