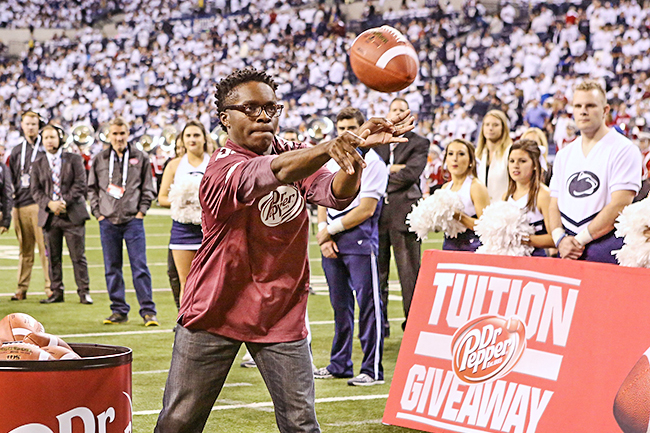 One of Ole Miss’ own took home $100,000 in tuition prize money from Dr. Pepper during their Tuition Giveaway held during halftime of the Big 10 championship game in Indianapolis, Indiana this past weekend.

Jarrius Adams, 19, a sophomore public policy and political science major from Hattiesburg, was the lucky student who won by tossing footballs through a ring. He first found out about the Tuition Giveaway after seeing a friend participate in it back in 2013.

“I remember watching her on TV wishing that I had the same opportunity,” Adams said. “I was scrolling on my phone one day and I saw the ad promoting the scholarship. After reading it thoroughly I found out that I was eligible.”

To practice throwing for the competition, Adams was given two footballs by Ole Miss Athletic Director, Ross Bjork, and began practicing every day.

“In the beginning, I was just throwing the ball so I could familiarize myself with it,” Adams said. “On some days I even took them to my classes. Over Thanksgiving break is when I did most of my practice. Me and my 12-year-old brother, Matthew Adams, constantly threw the balls back and forth.”

Adams says that apart from working on accuracy, he worked on improving his speed, and it paid off when it came to the main event. During the final round, he threw 11 successful balls during a 30 second time frame. His opponent completed four.

From being picked up in a limousine to a five-course dinner, Adams says that the Dr. Pepper brand treated him like a star to this “once-in-a-lifetime experience.”

When interviewed by Fox News, Adams told the cameras (and the entire country), “People from small towns can do anything they set their mind to,” a message he firmly believes.