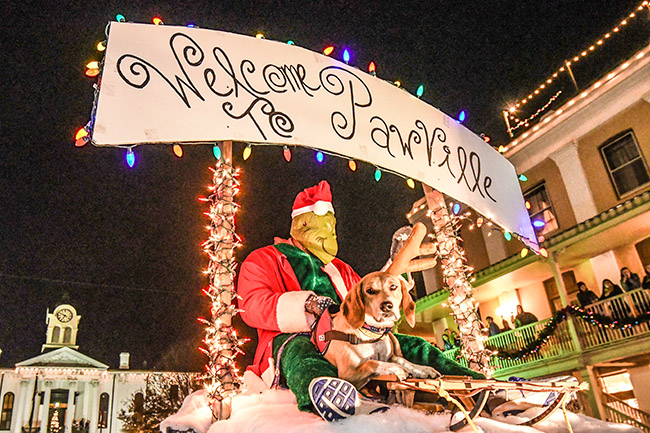 The Crossroads Animal Hospital float featured the Grinch during the annual Christmas Parade, in Oxford, Miss. on Tuesday, December 6, 2016.

Oxford held its annual Christmas Parade a day later than normal, and, as per usual, it did not disappoint.

An estimated 15-20 floats took part in the festivities Tuesday evening along a route which ran along North Lamar, through the Square and ending at the Ford Center on campus.

Keith Gillespie, President of the Lion’s Club (who helped organized the parade), hasn’t missed the event in 46 years and says it’s an easy and fun one to manage.

“It’s not a hard thing to put together,” he said. “We just let (the floats) come and just fall in. It’s something we have to do every year.”

Some of those who participated in the parade this year included Baptist Rehab (with a massive “Finding Nemo” themed Christmas float), the Cub Scouts and Girl Scouts, and the Oxford High School marching band.

Michelle Robinson, marched for the first time in the parade this year with a City of Oxford, recycling themed float. The float’s design consisted of a snowman and Christmas tree constructed from recycled bottles.

“I’m excited we got it done,” Robinson said. “Our snowman fell apart with the wind on Monday, so we’re glad that he’s still standing.”

“I’m excited about being on my mom’s float,” added Robinson’s daughter Rachel, a third grader who has previous parade-marching experience with her Girl Scout troop.

For father David Carroll, marching with his son in Cub Scouts, this is his second year involved with the event.

“My favorite part about the parade is seeing all the kids and their joy with it,” Carroll said.

Tenth grader Kimya McEwen, a flautist with the marching band, has another thing she looks forward to each year at the parade.