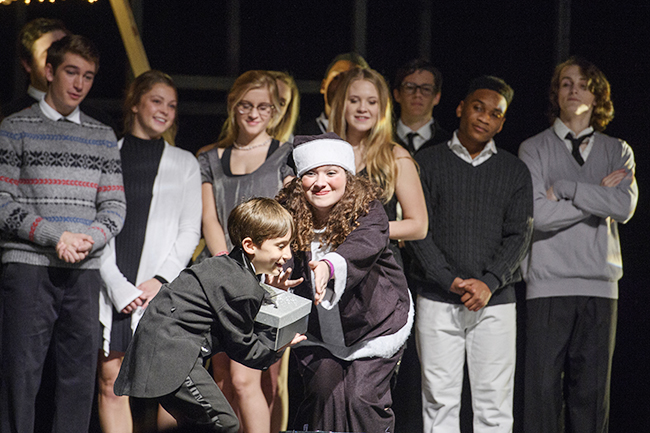 Through the years, there has been no dearth of adaptations of Charles Dickens’ classic novel, “A Christmas Carol.” From Bill Murray’s “Scrooged” to Jim Henson’s Muppet version, Dickens’ tale of finding the true meaning of the holiday has reinvented itself time and time again.

Now, the Oxford High School Theatre Program will be bringing their own adaptation to the stage with “’Tis Another Season”, a student-choreographed, original ballet.

In this adaptation, the Scrooge-esque character is Clara, the owner of a fashion magazine (appropriately named Scrugé). After falling asleep in her office, an Angel takes Clara on a journey in order for her to discover the Christmas spirit.

John Davenport, the head of the theatre program at the High School, says that the show was first created three years ago, as a fundraiser. Since this year serves as another fundraising year for the program’s trip to the Fringe Festival in Edinburgh, Scotland, Davenport thought it would be a good idea to do the show again with some new alterations.

“This version is very similar in the overall arc of the story to the version previously produced,” Davenport said. “We have changed all of the genders thus making our Scrooge-like character female. The show is choreographed beautifully by a junior student, Anne Elizabeth Pittman.”

Davenport says that directing an original script as opposed to an established one is a similar process, but with more freedom. In addition to “A Christmas Carol”, Davenport says other holiday classics like “It’s A Wonderful Life” and “The Nutcracker” also influenced the script.

“It has been fun to revisit this story and adjust it from the production we created three years ago,” he said. “Where in the previous version we had a home-town feel to it, we have stripped the show of any fluff and placed it in a very industrial setting. This has made it interesting to explore the lives of our main characters who are void of any holiday spirit.”

“’Tis Another Season” will be playing from Thursday through Sunday at the Kayla Miza Auditorium at Oxford Middle School. Thursday, Friday and Saturday will begin at 7:30 p.m. and the Sunday matinee begins at 2:00 p.m. Tickets are $5 for students and $10 for adults.