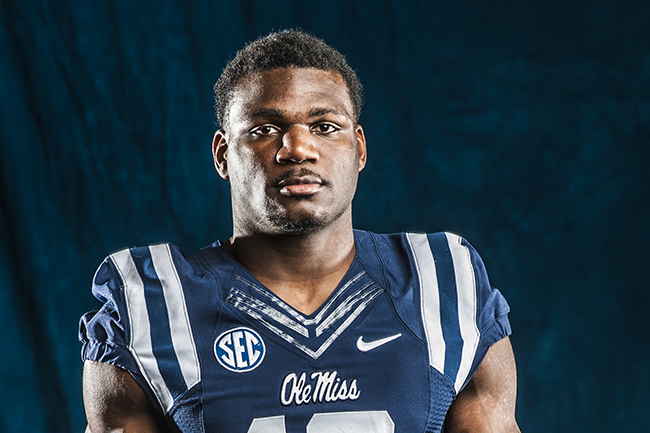 Marquis Haynes, in Oxford, Miss. on Monday, August 8, 2016, is returning to Ole Miss for his senior season. (Bruce Newman)

Whoever ends up being Ole Miss’ defensive coordinator will have one of the Rebels’ biggest playmakers back in the fold.

Defensive end Marquis Haynes will return for his senior season, announcing in a tweet Wednesday morning that he made the decision after talking things over with head coach Hugh Freeze and his parents.

After talking with my parents and coach Freeze it's best that I return to school and play my senior season as an Ole Miss Rebel.

Haynes was an impact player on a defense that didn’t have many this season, leading the Rebels with 11 tackles for loss and seven sacks — three more than anybody else — in his second year as a full-time starter. Signing with Ole Miss out of prep school after originally being denied admission at North Carolina, Haynes has proven to be one of the Southeastern Conference’s premier pass rushers with 24.5 career sacks.

Haynes, who also forced three fumbles and had an interception this season, had 10 sacks and 16.5 tackles for loss as a sophomore, both career-highs. His 7.5 sacks in 2014 are an Ole Miss freshman record.

The ability to get to the quarterback is valued in the NFL, which heaped a decision on the 6-foot-3, 222-pound Haynes, who’s viewed as an ideal fit in a 3-4 defense as an edge rusher. NFLDraftScout.com has Haynes ranked as No. 6 outside linebacker prospect for next year’s draft and No. 1 for the 2018 draft.

Freeze’s search for a defensive coordinator is in its third week after Dave Wommack announced his retirement prior to the regular-season finale against Mississippi State. The defense was the worst of Freeze’s tenure, ranking 50th nationally in pass defense, 110th in total defense, 120th in run defense and 125th in red-zone defense.

Ole Miss is also 97th in sacks with Haynes accounting for more than one-third of the team’s 20. The Rebels may have gotten some immediate help in that department Wednesday afternoon with the signing of Jones County Junior College standout Markel Winters, the nation’s No. 7 junior college defensive end prospect according to 247Sports’ composite rankings.

The 6-foot-3, 260-pound Winters, who decommitted from Ole Miss in November but ultimately chose the Rebels over Mississippi State, Auburn and others, racked up 16 sacks in nine games this season.