Pop Up Oxford to promote more tourism next month

The middle of winter can be a slow and dreary time, especially for visitors to a tourist-friendly locale like Oxford. To combat the cold weather doldrums, Visit Oxford has come up with a new week in January to foster more tourism in the town.

Pop Up Oxford will be a week celebrating all the aspects of the town’s rich arts culture. Beginning Jan. 22 and running through the week until Jan. 28, Pop Up will offer a plethora of activities that highlight the Oxford community.

To kick things off, a “Hotel Hop” will take place around the Square and will include hotels like the soon-to-be-opened Chancellor’s House (who will be at the Visit Oxford office), the Inn at Ole Miss, the Green Roof atop the Courtyard by Marriott and The Coop restaurant on the top floor of The Graduate. Shuttles and the double decker bus will be providing transportation from stop to stop.

Another event is an art crawl with stops at venues like the Southside Gallery and the Ford Center, and a discussion at the former led by artist Charlie Buckley. That night, the Ford Center will be presenting its show, “In the Mood: A 1940’s Musical Revue.”

The Oxford Film Festival will also be sponsoring a day of food and movies with screenings of “Sorry We’re Open” and “Smoke and Ears,” both directed by Joe York. York will also be on hand for a discussion after the screening along with panelists Ron Shapiro, Alan Arrivee and John T Edge.

The culmination of the week’s events begins on Jan. 26 with the Fiber Arts Festival which will run through the end of the Pop Up week. Also, on the 26th, Thacker Mountain Radio will be starting its spring season at Off Square Books.

“We are really excited about the festival,” Andi Bedsworth, the coordinator for the festival, said in an email. “We have 28 classes scheduled and 17 vendors coming from nine states. I am looking forward to all the events we have planned including an opening reception, a yarn/fabric swap, children’s activities and two lectures, an exhibit of fiber art by Diane Williams and special partnership programs with the University Museum and the Oxford Treehouse Gallery.”

Closing out the week on Jan. 28, there will be a TEDx talk at the Ford Center followed by an Ole Miss men’s basketball game against Baylor.

More events are still being scheduled and additional information can be found at www.PopUpOxfordMS.com. 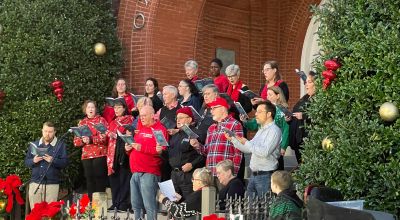