After Oxford Santa falls off roof, others step up to don the red suit 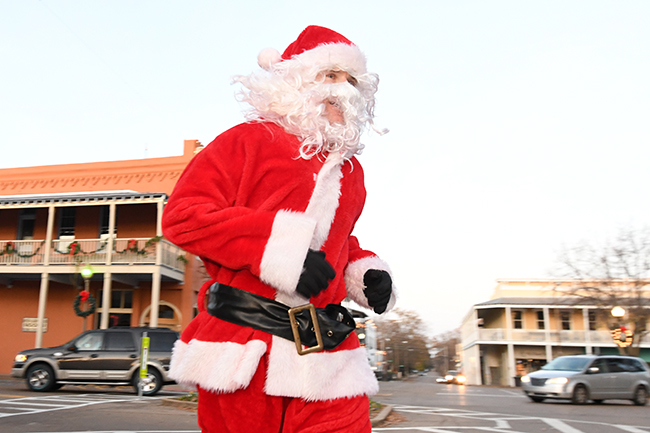 Shannon Singletary runs through the Square dressed as Santa Claus in Oxford, Miss. on Thursday, December 15, 2016. 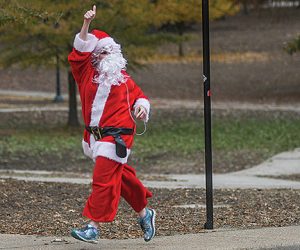 Oxford’s running Santa Claus almost came to a halt this season — but some friends and neighbors have stepped in to keep the tradition going.

For the past eight years, Santa Claus — Bret Beauchamp dressed in costume — has been seen running around the city streets in the weeks leading up to Christmas. He has done it daily, developing a tradition in which residents and children look for him, waving and honking horns and sharing photos of running Santa on social media.

But this year, Santa almost didn’t come to town because longtime runner Beauchamp was injured recently when he fell from his roof.

“I landed on the concrete and was knocked unconscious,” Beauchamp said. “My wife called the ambulance and they came and got me. They flew me to Memphis where I spent two nights in the hospital.”

Beauchamp said he had a “small brain bleed and a severe concussion as well,” and even though he’s back at home in Oxford and in the recovery process, he “definitely can’t run for the next several weeks.”

Thus, it appeared a great Oxford tradition – the running Santa Claus — might come to an end.

Some didn’t want that to happen, however.

Kate Embry, the first cousin of Beauchamp’s wife and also a neighbor, came up with an idea to keep Santa running despite the injury. Embry began a list online and solicited other running Santas to keep Oxford’s tradition alive. People quickly signed up to take turns running the streets of Oxford while wearing Beauchamp’s now-famous costume.

“Everyone loves Bret and his family, and the running Santa is just fun,” Embry said. “When I realized Bret would be off of his feet for a bit, I started asking my husband to fill in – then I started asking Bret’s friends. Everyone wanted to do it.”

One of those accepting the challenge was Rhes Low, who believed Oxford running Santa needed to keep going this year.

“Bret and his wife Lindsay are always doing for others with no expectation of return,” Low said. “This was a chance to do something for them.

“After I figured out how to keep the suit from falling off while running, it was an awesome experience,” he added. “Very simply, it made others really happy to see Santa running.  You quickly realize what a joyful gift Bret is giving to this community each holiday season.” 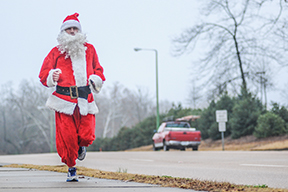 Beauchamp, in pharmaceutical sales, has been an avid runner for 30 years, participating in multiple marathons, triathlons and ironman competitions. He has run the Boston Marathon in less than three hours.

Beauchamp first decided to wear the suit for a lark eight years ago, but it became something he did every year.

“I thought, I’ll go for a run in a Santa Claus suit, just kidding around,” he said. “So I went for a run that night and it was funny; I got a lot of horn honking and yelling. And I’ve been doing it every year since then.”

Embry said that since December 9 the surrogate Santas have logged 34.5 miles.

“People are lined up through Christmas Day to take a turn,” she said. “Santa is earning his cookies.”

Jason Waller is scheduled to make the final run December 25 and he posted on the online signup form thoughts about the sweaty running Santas before him.

“I hope somebody cleans this outfit! Ha ha,” he wrote.

Beauchamp is thankful for all those that have stepped in while he’s recovering.

“The town of Oxford has just been amazing,” he said. “I don’t even know some of the people who signed up. It’s a wonderful place to live and I have great friends.”

Beauchamp expects to make a full recovery and plans to be back in position next year as Oxford’s running Santa. This year, however, he’s thankful for the gift of good friends who are keeping Santa on the city’s streets.

The Oxford Police Department posted this a few days ago on its Facebook page, if you want to see the Oxford’s running Santa in action: https://www.facebook.com/OxfordMSPolice/videos/10154842797714507/