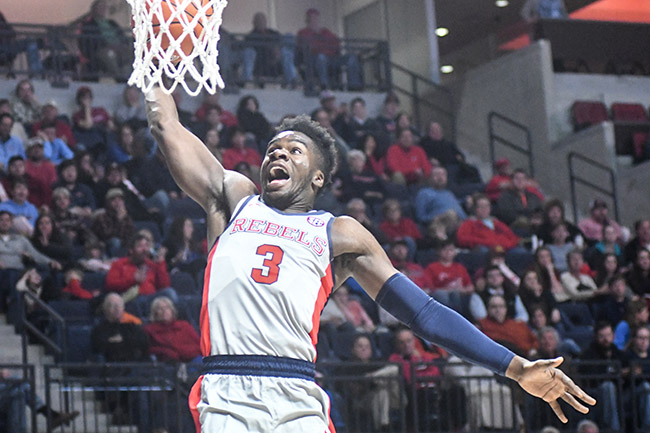 Ole Miss guard Terence Davis (3) is starting to thrive in his second year with the Rebels, having found himself in the starting lineup the last five games. (Bruce Newman)

Ole Miss continued its homestand with a win over Bradley on Monday, improving to 8-3 with one non-conference game left against South Alabama on Thursday before things get serious for the Rebels with Kentucky paying a visit to The Pavilion next week to open Southeastern Conference play.

Here are three takeaways from the win:

Ole Miss did what it needed to do

There are games that help a team’s postseason resumes if it can win them, and then there’s games that can be devastating losses. Simply put, Ole Miss got a win it needed to avoid the latter.

In other words, Ole Miss is in the midst of a stretch that can only hurt it if the Rebels don’t take care of business. The Rebels don’t have any bad losses, per se, with Creighton, Middle Tennessee State and Virginia Tech all being top-55 RPI teams, and Ole Miss kept it that way Monday.

Terence Davis is becoming a force

Terence Davis is in the running for most athletic player on the floor just about every time Ole Miss plays, so it’s no surprise he consistently flashed against a Bradley team that might’ve had the least athletic roster the Rebels have seen this season.

But Davis continues to produce regardless of the competition level.

Davis had 19 points and four rebounds, was 8 of 11 from the field and 3 of 5 from 3-point range — with 16 minutes left in the second half. He reached at least 18 points for the fifth time this season.

Head coach Andy Kennedy called Davis the Rebels’ most improved player before the season, and it’s easy to see why. The former two-sport standout at Southaven High is a blur in transition, hard to stay in front of in the half-court and seems to being playing better within the flow of the offense with better shot selection. His youth still shows at times — he committed three turnovers Monday and battled foul trouble in the second half — but the good is far outweighing the bad.

Ole Miss knows what it’s going to get from Sebastian Saiz and Deandre Burnett most nights (though Burnett is averaging eight points fewer than his season average over his last three games while shooting 27 percent over that span). Davis could be morphing into a consistent third scoring option the Rebels will need against league foes and could be a household name in the SEC before the season is over.

The quality of competition has to be taken into account, but the Rebels made things difficult for Bradley’s offense and have strung together their best defensive performances of the season in back-to-back games.

Ole Miss switched up its defenses like it does every game under Kennedy but stayed disciplined in its rotations (something Kennedy said after the game has been a problem) and was usually in the right spot to make plays. The Rebels had 10 blocks, 13 steals and rarely left shooters alone, holding Bradley to 31 percent from the floor — the lowest percentage for any of the Rebels’ opponents this season — and a team to less than 60 points for the first time this season. This after Ole Miss held Murray State to 36 percent shooting in its previous game.

The Rebels are still giving up most points in the SEC and still have the league’s worst 3-point field-goal percentage defense, but they appear to be making some progress as a group. And it couldn’t be coming at a better time with their SEC slate quickly approaching.

Next: Ole Miss’ game against South Alabama on Thursday will tip at 8 p.m. and be shown on the SEC Network