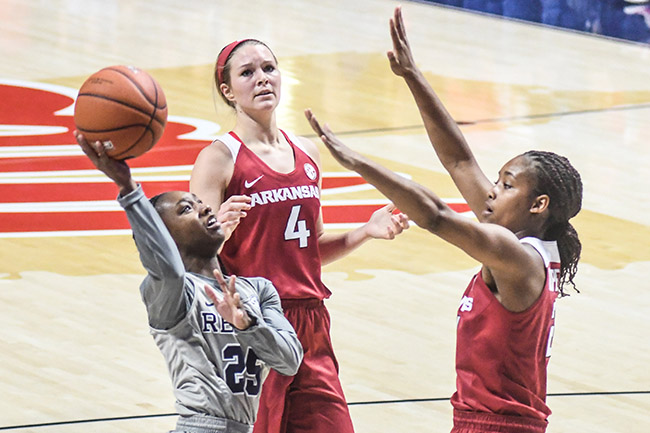 And the Rebels continued their hot start.

Ole Miss’ women won their sixth straight game Sunday, knocking off Arkansas 73-64 at The Pavilion in both teams’ Southeastern Conference opener. The Rebels improved to 11-0 at The Pavilion, matching their best home start since the 2006-07 season, and are 3-1 in SEC openers under head coach Matt Insell.

“Today was a big win,” said Insell, whose team will play four of its next five on the road starting with a trip to Alabama on Thursday. “We needed this.”

Manuel, the 6-foot-4 transfer forward whom Insell has frequently referred to as the Rebels’ ticket to the NCAA Tournament this season, had just six points on five shots in 16 minutes while leading scorer Madinah Muhammad (14.1 points per game) was held to six points below her average. Ole Miss was also without junior guard Chrishae Rowe, who’s averaged 10.5 points and four rebounds in her first four games since becoming eligible at the end of the fall semester but was held out because of a coach’s decision, Insell said.

“(Joseph) is a player that’s been in this league and knows what it’s about in this league, and you saw that tonight,” Insell said. “Shelby Gibson, I can’t say she’s going to be one of the best post players to play here because we have some pretty good ones in the rafters up there, but I think she’s going to be one of the better ones that’s played here in a long time and she just gets better and better.

“I told everybody that would listen to me last year that we had help coming in the paint, and it came even in a bigger way in June when Taylor decided to come. We do have a lot of depth in there.”

Junior guard Shandricka Sessom added her third double-double of the season with 11 points and 10 rebounds for Ole Miss, which led by as many as 22 in the fourth quarter. Arkansas used a 14-0 run to get within eight late in the quarter but didn’t get any closer.

Ole Miss shot 42 percent from the floor while limiting the Razorbacks to 38 percent from the field. Arkansas began the day as the fourth-best 3-point shooting team in the league but knocked down just 30 percent(7 of 23) of its shots from deep.

Jessica Jackson, the Razorbacks’ leading scorer at 18.1 points a game and the SEC’s active leading scorer, went 3 of 15 from the field and 2 of 8 from beyond the arc to finish with 11 points. Keiryn Swenson paced Arkansas with 19 points.

“She got the shots we wanted. They just didn’t go in tonight,” Arkansas coach Jimmy Dykes said. “They didn’t do anything defensively to bother her. It was just one of those nights where the ball didn’t go in for her.”

The Rebels used their defense to stay ahead early with the offense struggling without Manuel, who played just four minutes in the first half after picking up two quick fouls. Ole Miss shot just 33 percent from the field in the first half and missed its first nine shots from 3-point range but forced 10 of Arkansas’ 13 turnovers to take a 27-26 halftime lead before pulling away.

Watch Insell talk about the win and the Rebels’ dominance on the interior in the video below.